Louisiana Senate passes $24.5B budget package for next year 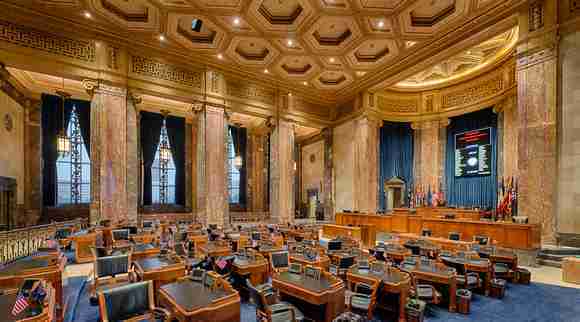 BATON ROUGE, La. (AP) _ A $24.5 billion budget proposal for next year that uses dollars from anticipated increases in taxes and fees to protect public health care services and colleges from cuts received support Monday from the Louisiana Senate.

Senators’ 36-3 vote set up the dividing line between lawmakers in the House and Senate who are trying to cobble together a deal on budget and taxes for the fiscal year that begins July 1, with only days remaining in the legislative session.

Gov. Bobby Jindal, planning a presidential campaign, is threatening to veto financing plans used to balance the budget if the deal doesn’t meet parameters designed to protect his anti-tax record. Any vetoes would leave higher education and health care subject to slashing. So far, senators have been more receptive to meeting Jindal’s restrictions than the House.

The legislative session must end by 6 p.m. Thursday.

Senate Finance Committee Chairman Jack Donahue described the package of budget and tax measures passed in the Senate as containing “enough money to fund higher education and health care as we think is necessary.”

“We tried to come up with reasonable solutions,” said Donahue, R-Mandeville.

The Senate version of next year’s budget contains at least $200 million more in spending than the House version, most of it poured into health services for the poor. House leaders support many of the spending add-ons but object to some of the Senate tax increases proposed to pay for them.

Both the House and Senate have agreed to raise cigarette taxes, close tax loopholes, shrink tax break programs and scale back business subsidies to drum up new money for next year’s budget.

The Senate is seeking a much higher tobacco tax rate that also would sweep in more types of tobacco products than the House sought. Also, the House disagrees with the Senate’s plan to make deeper reductions to Louisiana’s generous film tax credit program. The Senate also created a new $50 fee increase on car buyers.

Sen. Karen Carter Peterson, D-New Orleans, was one of a few Democratic senators who opposed the budget proposal.

She described it as “like writing a check and not knowing how much money is in the account” because it balances only if the House agrees to raise the same amount of revenue as the Senate did with a separate set of more than a dozen tax measures.

More than $500 million of the budget proposal would be tied to patchwork financing not expected to be available a year later _ down from $1.2 billion this year, but still assuring the budget negotiations start with new gaps next year.

“I don’t like a piecemeal approach to it, but I can’t do anything about that right now,” Donahue said.

Tax changes approved by the House would have raised about $615 million. Adjustments to the bills by senators would add at least $200 million on top of that.

The House used its revenue increases to protect higher education from cuts. The Senate used its additional money to fill gaps in the LSU hospital privatization deals and to keep the LSU medical schools in New Orleans and Shreveport from absorbing millions in insurance and retiree costs from the privatization deals.

Generating complaints in the House is the Senate’s removal of a proposed $36 million inflationary increase in spending for K-12 public schools to pay for other programs.

Next post Parachute fails to inflate during NASA test off Kauai