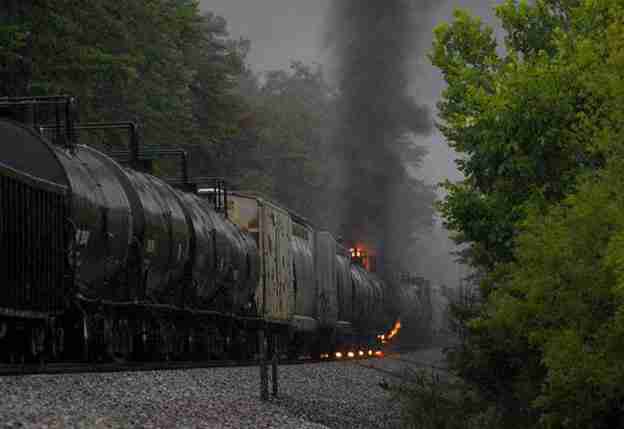 By STEVE MEGARGEE and JOHNNY CLARK

About 5,000 people within a mile-and-a-half radius of the crash site were evacuated, along with several businesses, Thursday morning in Maryville. Most received urgent knocks at their doors between midnight and 6 a.m. Thursday by emergency workers who told them they should leave immediately.

City Manager Greg McClain said Friday that officials were working on a plan to lift the evacuation. More details were expected at a news conference at noon Friday.

“We are ready to begin the process _ it will be a process _ to develop plans for repopulation, removing the evacuation in phases,” he said.

The concern stemmed from the contents of the car that derailed: liquid acrylonitrile, which officials said is a hazardous material used in multiple industrial processes including making plastics. It’s flammable and it’s dangerous if inhaled. The EPA says some effects of breathing acrylonitrile include headaches, dizziness, irritability and rapid heartbeat.

Eighty-seven people were treated at Blount Memorial Hospital in Maryville, and 36 were admitted, hospital spokesman Josh West said. None had life-threatening injuries, but they were experiencing respiratory issues, skin irritation and nausea, West said.

One person was discharged early Friday, and the number of patients being released from the hospital was expected to increase throughout the day, West said.

Ten first responders were treated at the hospital after breathing fumes.

Despite the inconvenience and the uncertainty about when they could go home, some of the residents who were evacuated took the disruption to their lives in stride.

“It really hasn’t been that bad,” said John Trull, 43, an aircraft mechanic from Maryville who was having dinner with his wife in the Heritage High School cafeteria Thursday evening. He called the accident a blessing in disguise because he and his wife had been able to spend more time together.

“Everybody here in the community with the evacuation has been great,” Trull said. “They have accommodated everyone, CSX responded real quick and they’re taking care of everyone.”

Trull and his wife booked their own hotel room before learning CSX was providing vouchers. Later they were told CSX will reimburse them. Other evacuated residents were pleasantly surprised by hotel vouchers and an abundance of food and free ice cream.

Craig Camuso, CSX regional vice president for state government affairs, said authorities didn’t know how much acrylonitrile was spewing out and burning, or how much remained in the tank. A byproduct of burning acrylonitrile is cyanide, and there were concerns that some would be contained in the fumes, Blount County Mayor Ed Mitchell said.

Smoke had stopped rising from the site by 6 p.m. Thursday, Mitchell said. Firefighters spent the day hosing down neighboring rail cars to keep them cool while also trying to move them away from the flames.

Mitchell asked residents near the derailment site not to drink well water for now; city officials said there was no indication yet whether well water was affected by the accident. CSX was providing bottled water to residents at a local middle school.

Kevin Eichinger, an on-scene coordinator with the EPA, said air, water and soil samples were being tested. McClain said air samples have been “very, very favorable,” and Eichinger said the hazardous product did not appear to make it into a nearby creek.

The train was traveling from Cincinnati to Waycross, Georgia. It had 57 cars and two locomotives, and 27 cars carried hazardous chemicals: nine with acrylonitrile, 16 with propane and two with asphalt, Camuso said. He said the cause of the derailment was not yet known.

The Federal Railroad Administration said it had investigators and hazmat inspectors at the scene and would investigate the cause once it was safe to do so.

The National Transportation Safety Board is not investigating the accident, but will monitor it and could send an investigator later, NTSB spokesman Terry Williams said in an email.

In general, the transportation of hazardous materials in commerce is regulated by federal law, which requires that hazmat shippers be registered, the material be properly classified, the handlers have preliminary hazmat training and that the material be labeled and held in proper containers, Pipeline and Hazardous Materials Safety Administration spokesman Gordon “Joe” Delcambre Jr. said in an email.

He said more than 1 million daily shipments of hazardous materials are moved across the nation by all modes of transportation.

Several residents of Maryville said they were not aware of the derailment until they got a call or someone knocked on their door early in the morning.

The disruption troubled Casey Mingie, 25, who works for a temp agency out of Knoxville and was evacuated to the high school. She didn’t know about the CSX hotel voucher program and arranged to stay the night with a friend.

“I was worried about friends and family, hoping everybody was out and safe and not breathing harmful stuff,” she said. “I’ve been worried all day.”

Brittany Parrott said she was awakened by a knock on her apartment door about 4:30 a.m. Although she didn’t hear the derailment, she said she noticed the effects of it as she went outside.

“You could smell it in the air,” Parrott said. “I had a headache, I was feeling nauseated and lightheaded, all the symptoms.”

Maryville is a town of nearly 30,000 people located about 20 miles south of Knoxville and just outside the Great Smoky Mountains National Park.