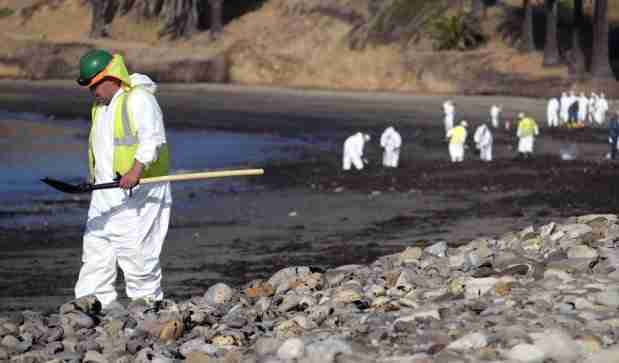 By MICHAEL R. BLOOD
LOS ANGELES (AP) _ As thousands of gallons of crude oil from a ruptured pipeline spread along the California coast, its operator was unable to contact workers near the break to get information the company needed to alert federal emergency officials, records released Wednesday said.

Personnel for Plains All American Pipeline needed the precise location of the May 19 spill and an estimate of its size before notifying the National Response Center, according to the records released to federal elected officials.

Company workers at the site near Santa Barbara were contending with “immediate demands and distractions” and couldn’t be reached by Plains personnel based in Bakersfield, the documents said.

One of the workers, along with firefighters, used shovels to try to construct a makeshift berm to slow the oil’s spread. The company’s account said workers also made “various calls by cellphone to mobilize resources, make notifications and coordinate activities.”

It wasn’t clear from the records why company personnel in Bakersfield couldn’t reach their workers at the scene.

The Texas-based pipeline company has faced criticism for how long it took to relay information to the federal government on the break estimated at up to 101,000 gallons, even though its internal planning documents repeatedly stress the importance of notifying the government of a leak as quickly as possible.

Meanwhile, the cost of cleaning up the spill has climbed to $92 million, Patrick Hodgins of Plains All American told reporters Wednesday. Hundreds of workers have spent weeks excavating contaminated soil and scraping rocks.

On Tuesday, with the pipeline shut down indefinitely, Exxon Mobil Corp. announced it has halted operations at three offshore platforms because it can’t deliver oil to refineries. Santa Barbara County earlier rejected the company’s emergency application to truck oil to refineries.

Under federal regulations, the pipeline company was required to notify the National Response Center of the leak at the earliest practicable moment. State law requires immediate notification of a release or a threatened release.

By 11:30 a.m. on the day of the break, a Plains operator remotely shut down the entire pipeline because of what the company called pressure anomalies.

An hour later, firefighters responding to a call about a petroleum smell near Refugio State Beach discovered the spill. At that time, Plains workers who were nearby for a spill training drill went to the beach.

Another hour passed before a company employee confirmed the spill at 1:30 p.m., but it was nearly 3 p.m. before Plains All American contacted the response center.

By then, the federal response led by the Coast Guard was underway.

The Associated Press reported earlier this month that Plains had assured the government in filings that a break in the line was “extremely unlikely” and state-of-the-art monitoring could quickly detect possible leaks and alert operators.

Company calculations assumed it should take no more than 15 minutes to discover a release and shut down the flow.

The federal Pipeline and Hazardous Materials Safety Administration is investigating the cause of the break along a corroded section of pipe, which is part of a network that moves crude oil to inland refineries.

The company said in its response to the lawmakers _ Democratic Sens. Barbara Boxer and Dianne Feinstein of California, and Edward J. Markey of Massachusetts; and Rep. Lois Capps, D-Calif. _ that it would be premature to reach conclusions about the timeline of events that day.

Plains All American spokeswoman Meredith Matthews said company personnel were on the beach with firefighters at about the same time the response center was alerted to the spill by local officials.

“The response was not delayed,” she said. “Our guys were doing the right thing to stop the flow of oil into the ocean.”

The records were released after federal lawmakers asked the company and federal regulators to answer questions about how the spill occurred and its aftermath. The spill fouled beaches and created a 9-mile slick in the Pacific Ocean.

Though preliminary, the records provide a look inside the company trying to contend with what became the largest coastal oil spill in California in 25 years.

The records indicate that personnel in Bakersfield eventually determined the location of the break and provided a spill estimate of 21,000 gallons to the response center, even though they had not spoken with the workers at the site. That figure was significantly less than the actual amount released.

At one point, company workers drove along the pipeline searching for the source of the oil. After the spill was confirmed in the early afternoon, the personnel in Bakersfield began calling regulatory agencies, but it appears some of those calls duplicated notifications made by other agencies, the documents said.

In a letter to the lawmakers earlier this month, the pipeline agency said it planned to issue an enforcement action against the company for probable violations based on a review of the line that was completed in 2014.

The agency also disclosed that it had taken an enforcement action against Plains in 2013, after an inspection of control systems.