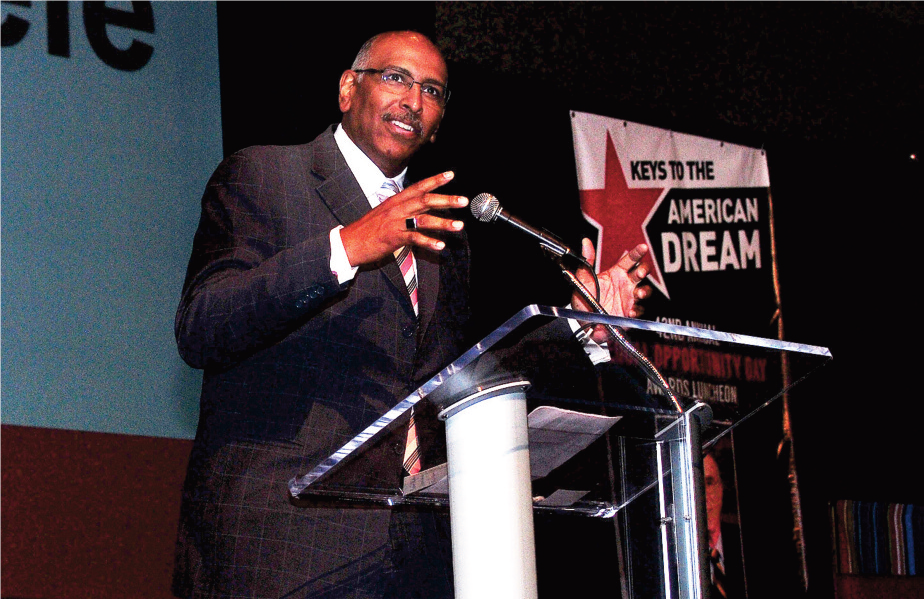 WEST PALM BEACH, Fla. – As a Republican, Michael Steele, political analyst for MSNBC and the first African-American to serve as Chairman of the Republican National Committee, couldn’t help but address the “elephant in the room,” as he took to the stage Wednesday as the keynote speaker for the Urban League of Palm Beach County’s 42nd Annual Equal Opportunity Day luncheon. “I gotta say Trump! I’ll get to your theme of the “American Dream” in a moment, but first Trump –let’s get this out of the way,” he told the audience of hundreds gathered at the Palm Beach County Convention Center –many of whom were likely hoping he would tackle the issue of politics given the state of his political party right now and the party’s debacle with presidential front-runner, Donald Trump. Steele didn’t disappoint, he tackled the political issues right away.

“Last night was nothing short of phenomenal!” said Steele, referring to Trump’s overwhelming win in the New York primary race on Tuesday. “The man is making a turn into a full- fledged nominee of the Republican Party! How they (Republican Party leaders) adapt to this change remains to be seen,” he said, referring to the Party’s discomfort with Trump as the presumptive nominee for the Party. But Steele intimated that the Party will just have to deal with it.

“Donald Trump will likely have the number of delegates he needs to win before July. If not, he’ll be pretty close. That’s the harsh reality that no one wants to face –the G.O.P. It’s going to be interesting- to see how the Party adapts to that,” Steele said.

Steele also indicated that Trump is falling more in line with becoming more ‘presidential’ as the race continues. “Last night (in his victory speech) he said, ‘Senator Cruz.’ He used to call him ‘Lying Ted,’ (referring to Trump’s rival Senator Ted Cruz.) But last night, he constantly referred to him as ‘Senator Cruz,'” Steele pointed out. “It’s a small change but it makes a difference.”

Steele also talked about the Democratic primary. “On the Democratic side, Hillary Clinton will be the nominee. And in many respects, she is a better nominee than her husband, (former President Bill Clinton.) She’s shown that in two different campaigns now.”

Steele was adamant about the nominees he believes will end up running for the White House. “You will likely see Hillary Clinton and Donald Trump as your nominees,” he predicted.

Emma Banks, principal of Inlet Grove Community High School in Riviera Beach, also a Republican and a board member of the Urban League, said she didn’t want to comment on politics, citing she was on school time and didn’t want to cause any conflict with her role as school district employee. “Maybe I should say, ‘no comment,’ but the event was great as it always is,” she said afterwards, as she rushed out the door.

But Artie Williams, Vice President of Mothers Against Murderers Association (MAMA), wasn’t shy about addressing Steele’s comments. He said he is on team Hillary (Clinton), though neither side has adequately addressed the issue of violence seriously, of which his organization has great concern. “Politics plays a big role right now, especially for African-Americans. We have to hold these politicians accountable for what the black community wants and needs,” he said. “We don’t want just another elections speech. We need for promises to be kept.”

Lynne Hubbard, a candidate for councilwoman for the City of Riviera Beach, who is in a contentious run-off with incumbent Bruce Guyton, says Steele’s stance on education is on point. “He said the education of our youth is everybody’s problem and he is correct. If ever there was a nonpartisan issue, education is it,” said Hubbard.

“But until you had the same rights and freedoms as everyone else, the American Dream is just a fruitless dream,” he said.

In his speech, Steele commended an Urban League youth who is involved in one of the organization’s programs for former offenders, who need to be steered down the right path. Jalisha Ferguson, a member of the Urban League Youth Employment Program, that works in conjunction with the Palm Beach Sheriff’s Office, stood before the packed house and broke down in tears while explaining how the Urban League has changed her life. “I was involved with the law and I almost gave up on my life. I had hoped someone would help me find direction in my life. And now, thanks to the Urban League, my life is headed upward,” said Ferguson, who will soon have her G.E.D. Steele said she was very courageous for telling her story in front of so many people. “It was probably the most intimidating thing she’s had to do, and we saw her heart,” Steele said.

Patrick Franklin, President and CEO of the Urban League of Palm Beach County, said in their works, they need nonpartisan help. “It takes everyone, no matter what side of the aisle you’re on. You have to put aside politics and make this work.”

Awards given out at the luncheon included Maurice Shand of the Urban League NULITES program for youth, and Bob Bertisch,an attorney with the Legal Aid Society of Palm Beach County, who won the Lifetime Achievement