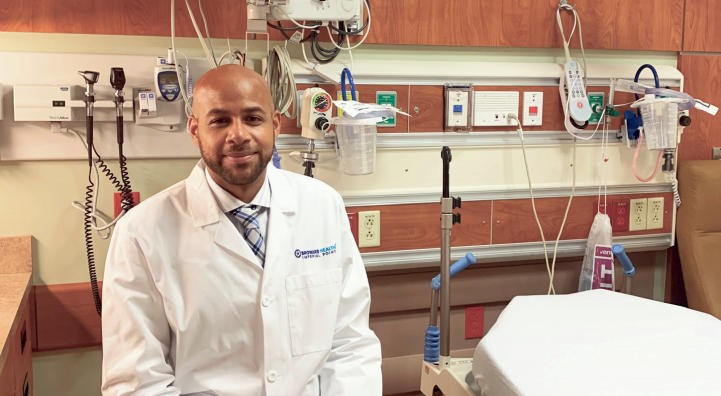 Fort Lauderdale, Fla. – According to the American Cancer Society, prostate cancer is the second most common cancer and the second leading cause of cancer-related death among men in the U. S. One in nine men will be diagnosed with prostate cancer during their lifetime. However, with early detection and proper medical care, the ﬁve-year survival rate is nearly 100%.

Michael Sims, 65, took his health seriously. He saw his primary care doctor regularly and had routine blood work to monitor his health. Last year, when the PSA (prostate-speciﬁc antigen) level in his blood rose sharply, which is a potential signal of prostate cancer, he and his doctor were concerned. Sims was referred to a urologist who biopsied his prostate tissue. The test conﬁrmed it was cancer.

“I had absolutely no symptoms,” Sims recalled. “If I hadn’t had my PSA checked, I never would have known I had prostate cancer. I’m glad I caught it when I did.”

Sims’ cancer was initially slow growing, indicating doctors could take an active surveillance approach. But when he progressed from low to intermediate risk within six months, the doctors decided he needed treatment.

“Treatment of prostate cancer has advanced tremendously in just the past 10 years,” explained Dr. Tyler. “Broward Health uses the latest technology to assist in both its diagnosis and treatment. For example, an MRI may more effectively pinpoint tumors within the gland, leading to a more accurate diagnosis. We also offer the full range of therapies, which may be speciﬁcally personalized according to the patient’s disease risk and goals for treatment. Some examples include procedures such as targeted cryotherapy, whole gland radiation, hormone ablation and minimally invasive surgical approaches, such as robotic-assisted nerve-sparing prostate removal.”

Beneﬁts of Robotic Surgery After weighing the risks and beneﬁts of treatment, Sims opted to have surgery to remove his prostate at Broward Health Imperial Point.

Sims was an excellent candidate for robotic-assisted surgery, which may offer several beneﬁts compared to traditional open surgery. Some beneﬁts can include less pain and bleeding, fewer complications and a quicker recovery.

“Using the robot may provide greater visibility and control, allowing us to perform the surgery more precisely,” said Dr. Tyler, who has performed hundreds of robotic prostate surgeries. “As a result, we are able to remove the cancer while sparing surrounding nerves and tissues. Patients receive the curative treatment they need with fewer long-term side effects. At Broward Health, we’ve honed expertise in this surgery, allowing patients access to high-level treatment closer to home.”

Dr. Tyler performed Sims’ surgery using the da Vinci Surgical System, the most advanced robotic surgical system available. The procedure was a success, and after spending just one night in the hospital, Sims continued his recovery at home.

“Some people don’t go to the doctor because they are afraid of what they’ll learn, but I was relieved the cancer was gone,” Sims explained. “I had my PSA checked soon after and my numbers were well in the normal range.”

The importance of routine screenings and tests, even during a pandemic, cannot be over emphasized, according to Dr. Tyler. “Early detection improves the chances for a positive outcome and saves lives,” he said.