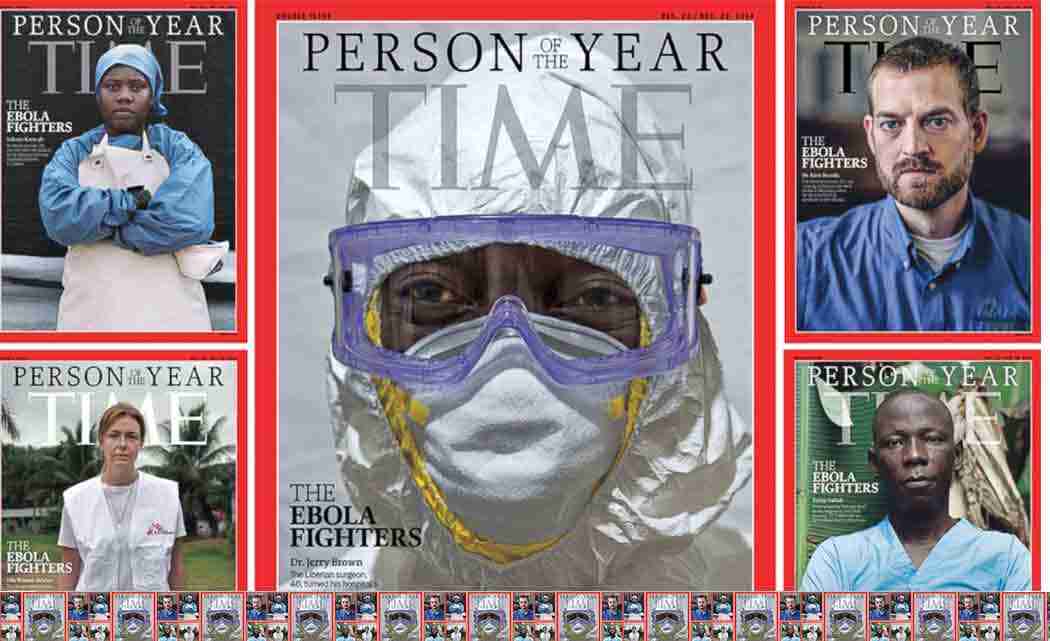 NEW YORK (AP) — Doctors, nurses and others fighting Ebola through “tireless acts of courage and mercy” have been named Time’s 2014 Person of the Year, the magazine announced Wednesday.

Time’s editor, Nancy Gibbs, praised “the people in the field, the special forces of Doctors Without Borders/Médecins Sans Frontières (MSF), the Christian medical-relief workers of Samaritan’s Purse and many others from all over the world” who “fought side by side with local doctors and nurses, ambulance drivers and burial teams.”

Gibbs noted that the disease has struck doctors and nurses.

“The rest of the world can sleep at night because a group of men and women are willing to stand and fight,” she wrote. They were cited “for tireless acts of courage and mercy, for buying the world time to boost its defenses, for risking, for persisting, for sacrificing and saving.”

Antoine Petibon, head of international programs for the French Red Cross, which has been active in Guinea’s anti-Ebola efforts, called it “great recognition for all these people who have been toiling in the shadows.”

“If it helps us wipe out this epidemic faster, all the better,” Petibon added.

The disease has taken its toll in myriad ways.

In September, a team trying to inform villagers about Ebola in the forests of southern Guinea was attacked by a mob. The bodies of eight people — two local administrators, two medical officers, a preacher and three journalists, were found stuffed in a latrine.

Henry Gray, MSF operations coordinator for the Ebola response in Guinea and Liberia, said the spotlight should be on the patients and the thousands of people in Sierra Leone, Guinea, Liberia and Mali “who are doing their best to deal with this horrendous outbreak.”

Gray, speaking by phone from Conakry, the Guinea capita, said, “We are happy for this recognition but will be even happier when the last Ebola treatment center is closed and the crisis is declared over.”

“People like myself, we are working hard, but we are not at risk,” Hald said from Nairobi. “People doing the safe and dignified burials, the contact tracing and the transport of the sick, working in the treatment centers — these are the people who deserve our praise and respect.”

White House press secretary Josh Earnest said President Barack Obama and his administration “could not be prouder of the brave men and women who have committed themselves to this effort in a foreign land. … But we must not forget that in order to bring this epidemic under control on the front lines, indeed the only way to prevent additional cases here in the United States, we need more of these medical professionals.”

“We urgently need more health workers on the ground,” said Stylianides. “The crisis is not over, and will not be unless we scale up the numbers of medical staff, field hospitals, laboratories and humanitarian aid.”