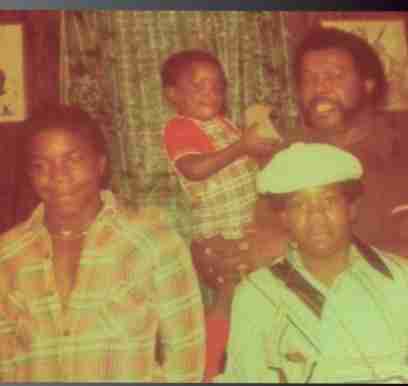 Riviera Beach, Fla. – Florida continues to be the epicenter of the coronavirus pandemic and Blacks continue to bear the brunt of the disease. Nowadays, nearly everyone in South Florida’s black communities knows someone who has contracted COVID19 or who has died from it. They are pastors, teachers, ofﬁcers, healthcare workers, and business owners, like Derrick McCray, owner and proprietor of McCray’s Backyard BBQ and Seafood, the popular West Palm Beach eatery known for cooking for the Super Bowl for the past 14 years.

McCray says he had a harrowing experience with the illness for six weeks and nearly died though he is on the other side of it now and has since tested negative twice. But getting to that point was mind-boggling for the usually energetic McCray, who was recently featured on the national television show, “The Talk,” as he was honored by co-host and comedian Sheryl Underwood for his philanthropy. Since the start of the pandemic he had been helping to feed 500 families weekly free of charge to help stem the tide during these trying times.

So imagine when he befell the fate of the virus. He says a chance encounter with an acquaintance in Fort Lauderdale is how he believes he contracted COVID-19.

He shook the friend’s hand and though he was wearing gloves and a mask, he believes he reached under his mask and touched his face. He believes he knows the exact moment he came in contact with Covid. He says he had a strange feeling. He was right. A rapid test at a hospital conﬁrmed it. That friend is currently hospitalized with the virus.

But McCray says he was near death and at his worse he could barely move and was overtaken mind body and soul by the disease. The aches and pains were so severe it was intolerable. But he learned something about COVID he didn’t realize. “This is a demonic illness. It comes to take your life. It’s not just physical but mental and spiritual.” He says his deceased father and grandmother appeared before him and snatched him out before he crossed over. “I knew I was dying, but then my father appeared and snatched me. And the next night my late grandmother was sitting at the side of my bed watching over me. And I felt my late mother’s spirit, too,” he recalled.

Through a spiritual awakening from his profound experience, he says he is more keenly aware of the pandemic as it relates to issues such as the political ramiﬁcations, healthcare of people of color, racial injustice, black on black crime, and civil rights. He says he is suddenly now even more apt to carry on the legacy of his father, the late civil rights icon Herman C. McCray, who has a bridge named after him in Palm Beach County. His father was known throughout the county for ﬁghting for the rights of the poor and underserved.

The younger McCray says he is outraged by the nation’s leadership and Florida’s leadership when it comes to the virus. He says President Donald Trump and Florida Gov. Ron DeSantis are only concerned about the economy and re-election. “They’re not concerned about saving lives. Where’s the empathy and the sympathy. If you focus on keeping the people healthy the economy will take care of itself.” He calls their policies ludicrous and dumb when it comes to the virus. “I know firsthand the importance of wearing masks.”

But McCray isn’t the only one sounding the alarm about Florida’s leadership. Several times this week, Gov. DeSantis was heckled during a news conference on the virus, barely letting him get his words out. And as Florida continues to soar out of control with cases and deaths, Miami-Dade, Broward, and Palm Beach Counties lead the pack. To date Miami-Dade continues to be the epicenter of the pandemic, having instituted an 8pm curfew last weekend to curtail it’s spread. It’s dining rooms have also been shut down. In Broward they are bracing for a similar fate with dining rooms. Palm Beach County voted last week to start the school year with virtual learning citing the schools are not prepared for students to return. The South Florida Times will take an indepth look next week at how the virus will impact schools and schoolchildren in Palm Beach County, particularly those in underserved communities.

The virus has been hard hitting with people of color as it has spiraled out of control in South Florida. Lives are being lost, families and businesses are being impacted.

McCray says he is blessed that during his quarantine he was able to pay his employees paid vacation, keeping food on their tables. Today he is back open for business while many black businesses are having to shut down due to the economics of the pandemic.