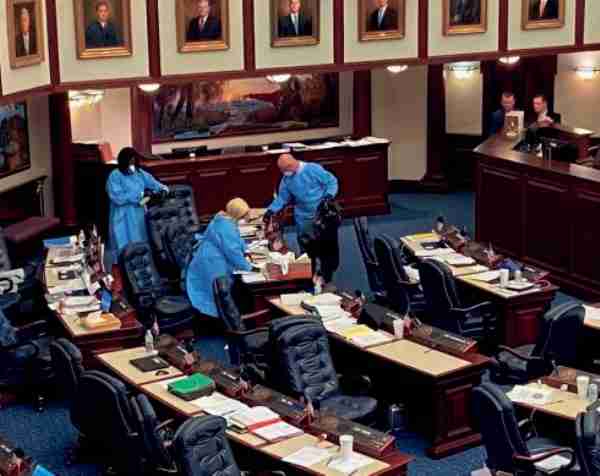 Tallahassee, Fla. (AP) The Florida House abruptly recessed Monday afternoon and cleared public galleries after several of its members agreed to be tested for the new strain of coronavirus after recently attending a political event in Washington where one attendee tested positive for COVID-19. Five House members and their staff attended the conference, according to House Speaker Jose Oliva.

“In an effort to set an example in the ongoing ﬁght against COVID-19, and in an abundance of caution for their fellow Members and staff, Representatives Sabatini, Altman, McGhee, Donalds and Byrd, along with a staff member, have voluntarily agreed to submit to testing,” Oliva said in a statement.

“They have self-isolated pending return of results. After leaving the event 10 days ago, Representatives Sabatini, Altman, McGhee, Donalds, Byrd and the staff member are NOT symptomatic, and they were not in direct contact at any time with the individual who tested positive for the virus.” Crews in blue medical gowns swabbed the House floor during the recess.

For most people, the new coronavirus causes only mild or moderate symptoms, such as fever and cough. For some, especially older adults and people with existing health problems, it can cause more severe illness.

The vast majority of people recover from the new virus. According to the World Health Organization, people with mild illness recover in about two weeks, while those with more severe illness may take three to six weeks to recover.

Cleaning the Florida House has commenced. PHOTOS COURTESY OF YOUTUBE.COM AND STOCK PHOTO

The latest development was the latest in swift-moving events over the quickly spreading virus.

An earlier statement from the Florida Health Department had advised all individuals traveling internationally to self-isolate for 14 days.

Two hours later, health ofﬁcials revised its advisory to realign with federal health guidelines that require travelers returning from the high-risk countries _ China, South Korea, Italy and Iran _ to remain home and avoid contact with others.

It was unclear what led to the communications breakdown, when the Health Department seemed to take the unprecedented step Monday of asking all travelers to self-isolate for 14 days after returning from any foreign travel. A spokesman could did not immediately return phone calls.

Two people have already died in Florida out of 18 Florida residents that state health ofﬁcials say have tested positive for the new strain of coronavirus that is now quickly spreading across the United States and other parts of the world.

Health ofﬁcials across the country were quickly trying to contain the spread of the virus. In Florida, worries rose over how panic could play out in a state that is a destination for millions of visitors from overseas. Already, there is concern about how the virus could affect amusement parks such as Disney World in Orlando, one of the country’s most visited attractions. Cruise lines are also already being impacted.

In particular, the Health Department is suggesting that anyone who traveled last month on cruise ships on the Nile River in Egypt self-isolate because some passengers have tested positive with the novel strain of coronavirus.

The governor’s schedule Monday was expected to be dominated by COVID-19. The governor was to again speak with Vice President Mike Spence, who President Trump has appointed to lead the national effort against the disease. He was also expected to meet with reporters Monday afternoon, where he is sure to be asked about the state’s response to the health threat.

Next post PART III: A historical perspective on democratic control of black community