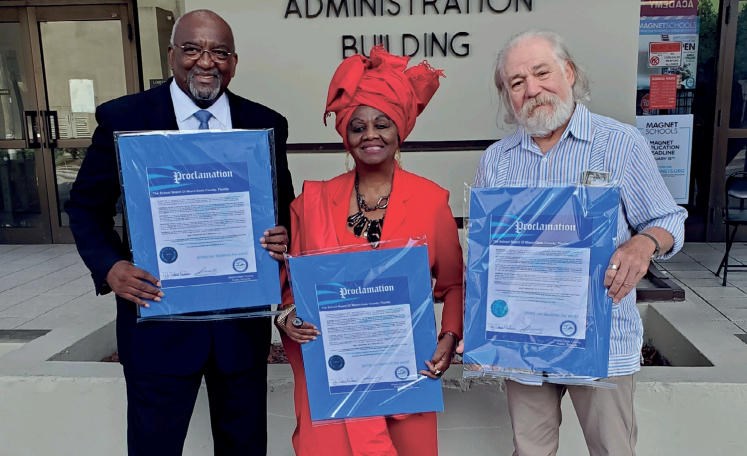 The resolution which passed unanimously also urged other municipalities to join in renaming their portions of Dixie Highway to Harriet Tubman Highway.

The idea to rename the thoroughfare came from Isabella Banos, the 16-year-old granddaughter of Modesto Abety (former CEO/president of The Children’s Trust), who was driving her to a friend’s house one day.

Isabella heard the GPS in the car saying turn on South Dixie Highway, and wondered why a name that symbolized slavery was still being used.

She suggested to her grandfather Abety to rename it Harriet Tubman Highway.

Abety then decided to email the 13 Miami-Dade commissioners, asking them to change Old Dixie Highway to Harriet Tubman Highway.

“We’ve got to change this,” Abety wrote. “I hope you agree.”

Commissioner Moss responded and took the lead to make sure that Abety’s and Isabella’s vision would come to fruition. On Sept.18, 2021, Old Dixie Highway was renamed Harriet Tubman Highway.

Tubman was an abolitionist, political activist, and a former slave who risked her life more than 13 times to lead others to freedom.

She was known as the “Moses” of her people, helping others gain freedom as she mobilized the Underground Railroad as the “conductor.”

Tubman was never caught and never lost a passenger. She is known as a fearless freedom ﬁghter who liberated hundreds of slaves.

Next post For the blind and visually impaired, awareness