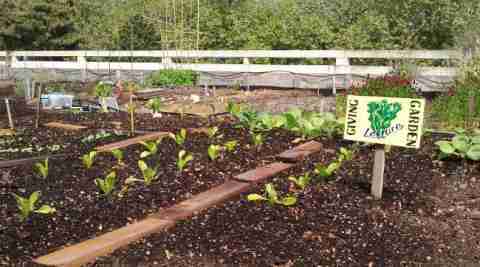 MYSTIC, Conn. (AP) _ The garden at Coogan Farm looks like a typical patch of farmland planted with tomatoes, potatoes and other varieties of vegetables.

But this garden has a special purpose. On a recent morning, people were planting corn, squash, potatoes and beans. Members of the Mystic Garden Club were planting herbs_ none of it for themselves.

The small but faithful squadron of volunteers was tending to the Giving Garden, as it is called, to benefit the Gemma E. Moran United Way/Labor Food Center, which will distribute fresh vegetables to 11 sites through its mobile food pantry program.

Coogan Farm Manager Craig Floyd said last year was the first year that the Giving Garden started its partnership with the food bank. The garden was just 1,600 square feet and produced 2,088 pounds of produce. This year it is 30,000 square feet and is expected to produce 6 to 8 tons of food.

“This is not only a giving garden,” said Floyd. “It’s a healing garden. It’s a teaching garden. It’s bringing the community together to provide nutritious food for people who may not always have access to fresh foods.”

The plan is to harvest two days a week and have the United Way send trucks to pick up the food, which is usually distributed the same day or shortly thereafter.

According to the United Way, one in six children in southeastern Connecticut is “food insecure,” meaning their access to food is limited or uncertain. A U.S. Census Bureau study indicates that 19,000 people in the region are living below the poverty level.

The food center is one of three food banks in the state. Every year, it distributes more than 2 million pounds of donated, surplus food to more than 80 food pantries, shelters, child care centers, community meal sites and programs for the elderly.

These member agencies in turn provide food and meals to 21,000 men, women and children throughout New London County each month. The mobile food pantry program feeds another 1,000 households, on average, each month at its distribution sites.

Last year, 31,720 pounds of food was donated to the food center through local farms like Provider Farm in Salem, Holmberg Orchards in Gales Ferry and Hunts Brook Farm in Quaker Hill.

Dina Sears-Graves, vice president of community impact at the United Way of Southeastern Connecticut, said the contributions of the farms are invaluable because fresh quality produce is expensive and some clients cannot afford to buy it.

“I think it’s great that we are using product that is produced locally,” said Sears-Graves. “We just don’t want to provide food, but we want people to eat healthy, too. People have to make hard choices … either buy something short-lived or with a longer shelf life.”

At the Giving Garden, Floyd instructed volunteer Sarah Reskey on how to plant corn, heirloom beans and squash together. Floyd noted that the corn they are planting is a descendant of a 1,000-year-old seed and is used for corn meal.

Reskey planted three corn kernels in the center, around which she planted four beans. Around the beans she planted four squash seeds. Floyd said the corn will grow tall, providing the beans a place to wrap around. The squash will provide ground cover.

Reskey started volunteering at the garden in March and usually comes three times a week.

“It a great project,” said Reskey. “It’s local and fresh as you can possibly get.”

Everything about the farm is intended to yield the most harvest. Red plastic ground cover is used to cover the earth where the tomatoes are planted. This is supposed increase the harvest by 12 to 20 percent, Floyd said.

Before he plants the russet potatoes, Floyd puts them in worm castings to increase the yield fourfold. The ground is sprayed with molasses to help microbe growth in the soil.

“What you learn here, you can pass on to others,” said Floyd. “This garden is very Mother Earth friendly.”

“It’s a good feeling to know that you are helping others,” said Fairman. “This will have a massive impact in the community because it will provide food year round.”

Volunteer Jane Allen said she used to run a food pantry in Pennsylvania and wanted to help the Giving Garden because she wasn’t satisfied with the type of food that was being provided locally.

She helped sponsor the first plot of land at the garden and rallied volunteers from All Souls Unitarian Universalist Congregation in New London to work there.

At 80 years old, Allen doesn’t let her age get in the way. She used a shovel to clear a potato pit and comes two times a week to help in any way she can.

She said she went to a mobile food pantry distribution site and saw a little boy eat a large bowl of salad from the food his mother had just received.

“It’s very rewarding,” said Allen of seeing the boy eat the fresh produce. “It’s a feeling of accomplishment when you see the harvest you helped grow getting to people who need it the most.”

The garden is a joint effort of the Denison Pequotsepos Nature Center, the United Way of Southeastern Connecticut and the Robert G. Youngs Family Foundation, which provided a $25,000 grant to start the garden.

Floyd said the Giving Garden is always looking for volunteers. He said many corporations have been generous in allowing their employees to volunteer for the day, but he needs daily volunteers. The only requirement needed is the ability to “breathe,” he jokingly said. No experience is needed as he will teach the volunteers what to do.