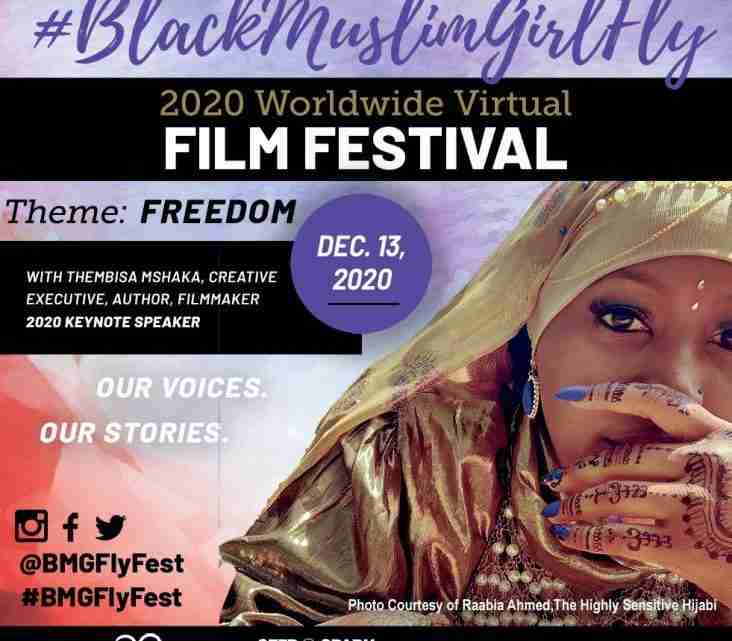 (Black PR Wire) – The Black Muslim Girl Fly Film Festival (BMGFly Fest), an inclusive and authentic celebration of Black Muslim women and Black women’s stories in TV/ ﬁlm, has announced the lineup of ﬁlms for the 2020 program themed Freedom, which will take place on Sunday, Dec. 13.

Since its launch, the event has been a platform dedicated to both established and emerging Black Muslim women ﬁlmmakers and creative talent, exploring diverse and underrepresented stories of the African diaspora across ﬁlm, TV and digital platforms.

The festival will be presented virtually, in partnership with ﬁlm-centric crowdfunding and SVOD platform, Seed & Spark. Tickets are available at SeedandSpark.com/BMGFlyFest with day passes for $36.

The lineup of features, short ﬁlms and episodic works include:

Singer/songwriter Amira Unplugged is also tapped to perform in the program and writer/director Nijla Mu’min (JINN) will receive the 2020 Harmon-Dixon Trailblazer Award.

Award-winning ﬁlmmaker Dixon said she launched the BMGFly Fest as an inclusive platform to expand cinematic narratives of Black women and highlight untold stories of Black Muslim women across the globe.

“We know that stories told through ﬁlm and TV both have a unique ability to scale empathy, deepen understanding and connect hearts and minds,” said Dixon of the fest’s efforts to demystify ideas about Black Muslim culture.

“Since our voices are not included in mainstream cinematic narratives, the Black Muslim Girl Fly Film Festival exists as our means of harnessing our full creative freedom. We are creating a platform for Black Muslim creatives to connect, share and celebrate our stories with audiences worldwide.”