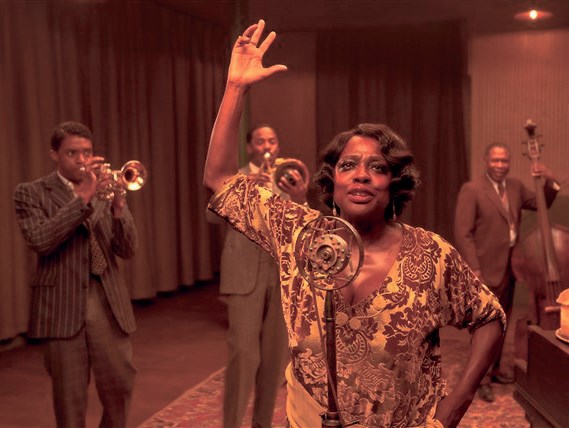 (Black PR Wire) In recent historical features about the Black experience in America – such as "12 Years A Slave," "Hidden Figures" and even biopics like "Ray" and "Ali" – racism and oppression are through-lines in the narratives; anti-Blackness becomes a character all its own.

The perils of white supremacy make their way into every plot even though the Black experience is at the core of these ﬁlms, seeping (as it can in reality) into the characters’ everyday lives.

While these ﬁlms are historically accurate, modern-day Black ﬁlmgoers often lament the prevalence of "slave ﬁlms" and the inherent tragedies at the center of these stories, asking to see more Black joy and less Black sadness.

Many writers have tried to capture the particular nuances and speciﬁcities of the Black American experience and, while several have been successful, there has been no one quite like playwright August Wilson.

Whether set in a dilapidated jitney station in the 1970s or a humble home in Pittsburgh in the 1950s, Wilson’s "Century Cycle" of plays chronicled Black life through each decade in the 20th century.

Though nine of his ﬁlms were set in his native Pittsburgh, "Ma Rainey’s Black Bottom" has 1920s Chicago as its backdrop – and a deﬁant Black woman at its center.

Now, nearly 40 years since it ﬁrst premiered on Broadway and 15 years after Wilson’s death, ﬁlmmaker George C. Wolfe has thrust Wilson’s vision of Ma Rainey on the big screen in all of her glorious audacity.

Adapted for the screen by Ruben Santiago-Hudson, Davis’ astonishing portrayal of Ma Rainey (or "Ma," as she was often called) is a masterclass in transformation.

With a mouth full of glittering gold teeth, a rounded stomach draped in silk fabrics and a face full of thick makeup, the actor is mesmerizing as the no-nonsense Blues singer with a soulful voice and a sharp attitude.

But it isn’t just about Davis: at a time when many Black people were just trying to survive, Ma was demanding what she was owed. What she represents as a Black woman is nearly unimaginable today – but Wilson tried, and now so have Wolfe and Davis.

Wolfe, for his part, paints a different picture of the North through Ma’s eyes.

Often, the South is portrayed on screen as the devil’s lair for Black Americans, but it’s home for Ma and when she lands in the Windy City early in the ﬁlm, it’s clear she doesn’t see Chicago as a prize. She sees no Promised Land in the Great Migration, nor is she moved or dazzled by city life, which she views as more conﬁning than her life in Georgia.

Wolfe shows us why as well: she stays in a swanky hotel to record her album, but it’s "colored only" hotel. She has her girlfriend, Dussie Mae (Taylour Paige), on one arm and her nephew, Sylvester (Dusan Brown), on the other for protection for them both. She glides slowly through the stifling summer heat while others bustle around her, but the beaming sun causes her heavy coat of makeup to slide down her face.

She refuses to conform to the will of others, and Ma’s even less concerned about her band.

Though Davis is the titular lead, "Ma Rainey" mostly tells the story of the four men in her band, squeezed into a small practice room and stuck between Ma’s refusal to conform to the demands of her record company, the pleading of her frantic manager Irvin (Jeremy Shamos) and the overt disdain of her producer Sturdyvant (Jonny Coyne) for all of them.

There’s Culter (Colman Domingo) – the closest thing Ma has to a right-hand man – on trombone, Slow Drag (Michael Potts) on the base, Toledo (Glynn Turman) on piano, and Levee (the late Chadwick Boseman) on trumpet. Levee’s young and more concerned with his $11 shoes and the sway of Dussie Mae’s hips than about being in the band, which he sees as only a means to another end.

Enthusiasm and fury, then, rattle between the band members like jazz notes, as they play and poke at each other; the cadence and dialect – speciﬁc to Black Americans – shines brightly here, putting Wilson’s signature poetry and dialogue on display.

It’s cathartic to watch Ma command the men of her band as Irvin zips in and out of the studio at her whim; she is well aware that her voice alone is the record company’s golden ticket and that, to get what they want, Irvin and Sturdyvant must play by her rules.

For her, respect and loyalty are what matter – more, perhaps, than success even. She seems to understand that her recording session might well be her last stand in the industry. (In real life, Ma’s protégée and alleged former lover, Bessie Smith, would soon overtake her in popularity.)

"Ma Rainey’s Black Bottom," by highlighting the dreams and triumphs of Black people instead of the burden of racial oppression, sticks with you well beyond its running time. Ma’s weary face and Levee’s anxious desperation may show that, even while living life on their own terms and flourishing, the horrors of racial violence are still there for Black people.

Still for Ma, eking out an existence in the world that is presented to her is not enough for her; she’s determined to thrive on her own terms – and does.