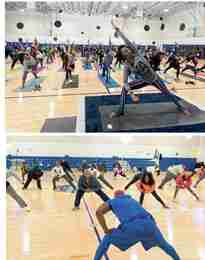 MIAMI GARDENS, Fla. – Miami Gardens Mayor Oliver Gilbert seems to embody the quote, “I can show you better than I can tell you,” as it relates to his weight loss success. While he’s reluctant to discuss his personal fitness journey with media, Gilbert is noticeably thinner, serving as powerful inspiration for this year’s ‘Mayor’s Fitness Challenge,’ which kicks off on Saturday, Sept. 22 from 9 a.m. to 12 p.m. at the Betty T. Ferguson Recreational Complex, 3000 NW 199th St, Miami Gardens.

“This is going to be an interesting fitness challenge. We’re doing it now and we’re also doing it in January,” Gilbert shared during a telephone interview. “We’re kind of giving people Thanksgiving and Christmas off, and coming back at it. It’s more of a sustained effort now,” he said of his third fitness challenge which he describes as a community effort inspiring people to move beyond excuses to a healthier life.

“A lot of times people won’t exercise because they don’t have anyone to exercise with. Or, ‘oh, I can’t afford to go to the gym.’ All these little things that discourage you,” Gilbert said.

For residents looking for a workout buddy, “You’re not going to be alone. If it’s just our power walk on Saturday mornings,” Gilbert added.

During the challenge, residents will have the opportunity to work out with Gilbert up to three times a week for 60 days. Registered participants will also receive a free health assessment, meal planning tips, online support in a private Facebook group and more.

The winner of the Mayor’s Fitness Challenge will receive a Fitbit Activity Tracker and workout kit. The challenge is funded by Simply Healthcare and Health Foundation of South Florida and runs from Sept. 22 to Nov. 17.

The challenge will include a variety of workout options, including aqua fit, boot camp, power walk, ZUMBA and trap yoga, which the mayor said showed participants’ progress during last year’s challenge.
“With yoga, you see the transformation of people, myself included, who couldn’t do some of the poses in the beginning but then they could in the end, and it’s because they kept trying.”

In addition to the personal health improvements participants can anticipate, Gilbert said the challenge will also include, “Added benefits to encourage them along the way. We like to build the carrot into the program,” alluding to the participation of occasional “star workout partners.”

Significantly, Gilbert explained, is how the challenge affords the city of Miami Gardens an opportunity to fulfill “an articulated yearning for community. This is one of those things. This is not us being a city, this is us being a community.”
To join the challenge, register online at

LiveHealthyMiamiGardens.com as an individual or a team; attend the kick-off event on Sept. 22, from 9 a.m. to 12 p.m. at Betty T. Ferguson Recreational Complex and show up to exercise with the Mayor up to three days per week.