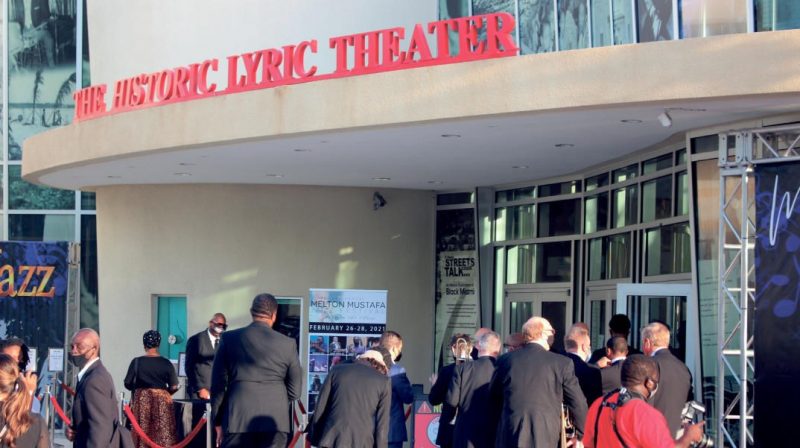 SUNDAY AT THE BLACK ARCHIVES HISTORIC LYRIC THEATER: The spirit of the beloved late "Maestro" permeated the institution he founded – and the exquisite music – over the weekend at the venerable Miami venue where baritone saxophonist Jason Marshall was among the festival’s special guests (above). Melton Mustafa Jr. (below left), admired his renowned uncle Jesse Jones Jr.’s saxophone virtuosity – and also strutted his stuff – while leading the Melton Mustafa Orchestra during the highlight concert dedicated to his beloved mother, Zakiyyah Mustafa. Composer and band leader Marquis Hill (clockwise from further below left), one of Chicago’s master trumpeters, was another special guest. Former area high school student Markus Howell – now youngest member of the Count Basie Band – returned to his roots, and the orchestra’s saxophone section. Bassist Marty Quinn was among the big band’s many master musicians. Timothy A. Barber, Black Archives executive director, kept the covid-era audience safe. There were CDs, T-shirts, and Melton Mustafa sanitizer on hand as well.

Fans of the original American art form took their covid precautions with them as they flocked to the Black Archives Historic Lyric Theater over the weekend for some the genre’s top international artists – including some with South Florida roots.

As usual the quintessential event, founded by the late master trumpeter, composer, band leader and educator, featured professional musicians in workshops with aspiring middle, high school and college music students. World traveled, Miami native Mustafa established an environment in which students could develop appreciation for jazz by interacting with the masters. Past concerts have featured the greatest of the greatest, including the beloved, late "Maestro," Mustafa.

Presented by MSM Arts United, and host sponsor The Black Archives History & Research Foundation of South Florida, Inc., the festival weekend, which opens with a Friday night of live jazz and poetry, again was crowned with music masters during Sunday’s red carpet closeout concert – replete with temperature checks at the door, and with masks and social distancing required – at the 108-year old Historic Lyric Theater in Overtown.

“It is an honor to partner with the Melton Mustafa Jazz Festival again for the sixth year,” said Timothy A. Barber, Black Archives executive director. “Mr. Mustafa was an amazingly talented musician, and a man with great vision. Our support for this festival is right in line with what we do all year round – preserve Black history and create a platform to showcase our rich culture through the arts, culture, and education.”

The event closing out Black History Month was a particularly welcome respite for its longtime fans – as well as members of the nearly 20-piece Melton Mustafa Orchestra, led by son Melton Mustafa Jr., an accomplished saxophonist, educator and band leader in his own right.

After several rounds of call-and-response between Mustafa and the audience (He: “Are you ready for some jazz?” Audience: Yeah!” He: “Nope.”), Mustafa ﬁnally seemed to feel the crowd could handle what he had in store. He launched the orchestra into “Blind Love Blues” – a Melton Mustafa Sr. composition – with solo work by internationally renown Jesse Jones Jr. – another sax master, as well as Mustafa Sr.’s brother – and the big band proceeded to seemingly blow the roof off the Lyric.

Soon the audience was treated to two other special guests, who more than lived up to their billing.

Marquis Hill – musician, composer and band leader, with roots as one of Chicago’s most thrilling master trumpeters, winner of the Thelonious Monk Institute of Jazz competition – showed why the Chicago Tribune called his longtime working group, Blacktet, “a remarkably polished” ensemble.

Just as masterful was multi-instrumentalist Jason Marshall, who Mustafa described as one of the most sought after baritone sax players today, having played with artists as varied as the late Roy Hargrove and Aretha Franklin, as well as Beyonce.

All evening, meanwhile, the Maestro’s crowd-pleasing original compositions were liberally sprinkled among jazz standards. Mustafa Jr., once again leading the orchestra as adeptly as Mustafa Sr. had through the years, explained that his father “wrote songs with meaning” – as in “Bridging the Gap” and “3 in 1 Blues” – which showed off the not only the orchestra musicians’ chops, but also the elder’s big-band composing skills, nurtured during his days with the Count Basie Band, and with myriad other top major artists from Duke Ellington to Frank Sinatra.

Mustafa introduced “A Night at El Morocco” by explaining it was written entirely during a 20-minute break while his father was playing with the Basie band. More importantly, he said, the song, like the night’s concert, were dedicated to his mother, Zakiyyah, who died in June. His father played the trumpet, he said; Mrs. Mustafa did the work, everything from bookings to … everything.

“Yessir! Jazz is alive!” Mustafa proclaimed at one point, as the big band full of master musicians swung through tune after tune, solo after solo.

The band returned from intermission to feature Jones’ trademark scat singing to the classic, “Walking My Baby Back Home,” before launching into another composition by Mustafa Sr.: “The Sun,” which his son described as a complex piece with myriad tonalities. The crowed consensus: The orchestra nailed it. One audience member ask that Mustafa repeat the title.

There also were plenty of awards and recognitions interspersed through the night; for example for Barber and the contributions of the Black Archives History & Research Foundation of South Florida, Inc.; and other supporters who understand the importance of institutions such as the MMJF, such as the Sunshine Jazz Organization, Greater Miami Convention & Visitors Bureau, and Miami Community Redevelopment Agency.

There also were kudos for Mustafa and family keeping their parents’ legacy alive, as when he pulled his brother Yamin – another talented trumpeter – from the bandstand to take a bow.

There was more recognition when Mustafa called saxophonist Markus Howell forward from the bandstand. Some audience members remembered when Howell was participating in festival workshops and playing with his high school jazz band during the concert. As the youngest member of the Count Basie Band today, he credited his former music teacher, Mustafa Jr., for guiding him in the days when he was not sure he wanted to do jazz.

When the audience demanded “Uncle Jesse!” for the closing number, Jones showed again why there is so much love in South Florida for the virtuoso musician. With the crowd hungry for more, there came yet another closing tune: a “Night Train” arrangement that featured Hill’s and Marshall’s blazing trumpet and baritone exquisitely melding with the orchestra’s piano, bass and drums, trumpets, saxophones and trombones.

It was a concert and evening of which both the late senior Mustafas would have smiled in twinkle-eyed approval. There were more parties all over South Florida on the last day of African American History Month. There was more history being made at the Lyric.