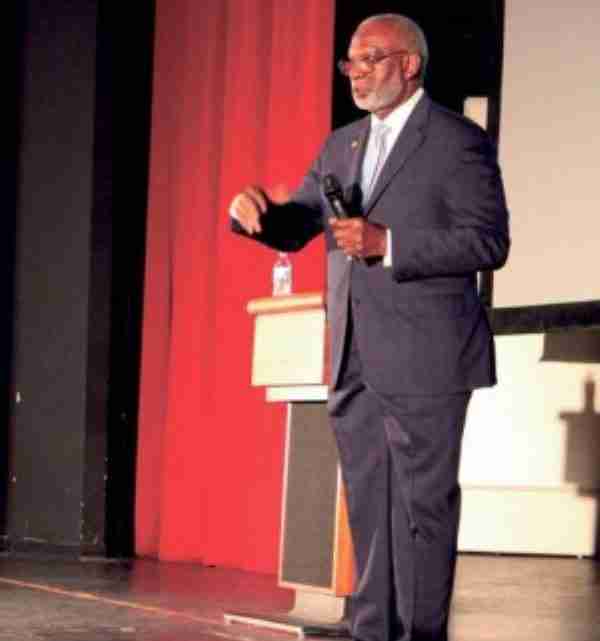 “Life is full of golden opportunities,” Satcher told the more than 1,000 students who met and attended various sessions with Medical Society members and other health professionals.

His humility showed through as he urged the students to prepare themselves for their opportunities, and as he patiently posed for photos or simply took time to speak with myriad attendees throughout the day.

Satcher, a Phi Beta Kappa graduate of Morehouse College – who earned MD and PH.D degrees from Case Western Reserve University, and also was elected to Alpha Omega Alpha Honor Society – served as the 16th surgeon general of the United States (1998-2002). He also was the 10th assistant secretary for Health in the Department of Health and Human Services (1998-2001), served as director of the Centers for Disease Control and Prevention, and as administrator of the Agency for Toxic Substances and Disease Registry, according to the symposium program.

Satcher has help top leadership positions at the Charles R. Drew University for Medicine and Science, Meharry Medical College, and Morehouse School of Medicine, and has received more than 50 honorary degrees and numerous awards from diverse organizations and agencies. He currently is the founding director and senior advisor for the Satcher Health Leadership Institute at the Morehouse medical school in Atlanta, Ga.

“I’ve had a lot of opportunities to serve, in this country, and I’ve been grateful for those opportunities,” the physician-scientist and public health administrator, with an extensive track record of leadership, research and community engagement, said later during an interview.

“With each one of them has come major responsibility. And for that too, I am grateful.”

The annual symposium provides “guidance for students who are interested in pursuing careers in healthcare, science and related ﬁelds,” said Dr. Roger L. Duncan III, the society’s Youth Services chair and past president, in his welcome. The organization – ofﬁcial local chapter of the National Medical Association – is named for the ﬁrst AfricanAmerican physician in Palm Beach County.

Known as the “bicycle doctor” because that is how he made his rounds, Dr. Thomas Leroy Jefferson (1867-1939) began his practice in 1902 after earning his medical degree from Meharry Medical School. He went on to become known as the father of medicine in Palm Beach County for its African-American and Native American communities, for his emphasis on patient education and helping the community.

The T. Leroy Jefferson Medical, Dental & Pharmaceutical Association was formed in 1947, incorporated as The T. Leroy Jefferson Medical Society in 1990, became a 501(c)3 in 2001, and continues its service activities including student mentoring and scholarships, and hosting events throughout the year such health fairs and the annual career symposium.