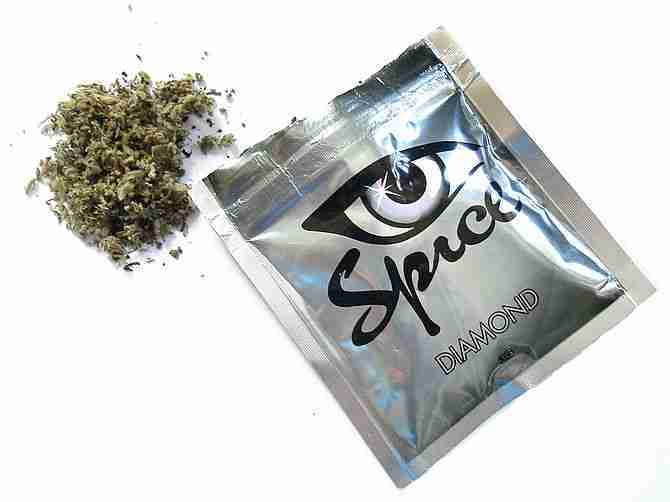 ANCHORAGE, Alaska (AP) _ Anchorage police say at least 30 people have been taken to the hospital over the past four days with health problems stemming from the use of a synthetic drug called Spice.

Police released a statement Wednesday asking people to contact them with any information about the source of the drug, which is banned by local and state laws, the Alaska Dispatch News reported (http://bit.ly/1Incwzr ).

Spice is made by spraying plant materials with psychotropic compounds. Police are saying the recent hospitalizations are from Spice that had characteristics similar to hemlock, a plant that can cause a number of symptoms when ingested, from dizziness to respiratory failure.

Lisa Sauder is the executive director of a soup kitchen and service provider called Bean’s Cafe, where she says ambulances responded several times on Wednesday.

She said staffers even administered CPR in a few cases.

“People are just collapsing and becoming unresponsive. Some are complaining about chest pain. Some are having seizures,” Sauder said.

She said seven Bean’s Cafe clients have recently died, and with the beautiful weather making exposure an unlikely cause, she suspects Spice may have been a contributor.

Police spokeswoman Jennifer Castro said toxicology tests will determine if components of Spice were ingested by those individuals, and whether the cardiac arrest and other symptoms that seem to have contributed to the deaths were a result of using the synthetic drug.

Spice was once sold in gas stations and convenience stores and marketed as incense or potpourri. In 2010 the Anchorage Assembly outlawed the designer drug based on its composition, but manufactures quickly changed agreements.

The Assembly passed a new law that banned Spice based on its packaging and a list of labeling criteria in 2014. Later that year, a similar statewide ban went into effect.