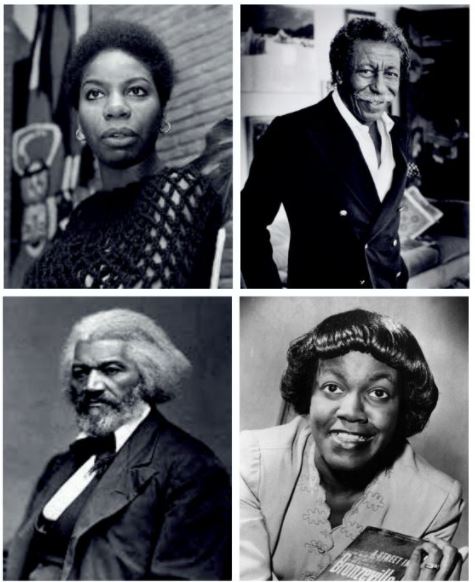 1) The youngest speaker at the March on Washington was this head of the Student Nonviolent Coordinating Committee, who later served more than 30 years as Congressman from Atlanta.

2) At the 2014 Sochi Olympics, Lauryn Williams became only the second American and fifth person in history to achieve what distinction?

3) In 1930, already an international star, Paul Robeson played the title character in this play, which he termed “a tragedy of racial conflict.” Robeson’s historic performance, praised for its “dignity and stately magnificence”, was rewarded with twenty curtain calls on opening night.

4) A marker on the Mississippi Blues Trail commemorates the moment this “King of the Blues” encountered a man playing slide guitar while waiting for a train. As a musician and composer, he brought the blues from the Delta to global prominence.

5) Her 2000 New York Times obituary stated that she “illuminated the black experience in America in poems that spanned most of the 20th century.” She won the Pulitzer in 1950 for her second book of poems, Annie Allen, becoming the first African American to win the prize.

6) This prominent abolitionist published The North Star, whose motto was “Right is of no sex – Truth is of no color – God is the Father of us all, and all we are brethren.”

7) These two San Francisco Giants greats, who share a name, played together from 1958 to 1971. With almost as many career home runs as Ruth-Gehrig, they constituted one of the most powerful batting duos in baseball history.

8) A woman of many talents, Maya Angelou was among the first partners of this dancer, who founded his American Dance Theater in 1958. At his 1989 funeral, Angelou read a poem dedicated to him, concluding, “And Lord, give him all the pliés he needs until eternity.”

9) Name the Supreme Court case that effectively ended legalized public school segregation in the United States and, within three years, provide the date of the unanimous ruling. (Bonus – The landmark decision overturned what infamous precedent established by the 1896 case Plessy v. Ferguson?) 10) During the decade spanning 1957 to 1967, this jazz great had a colossal creative output, producing classic albums including “Giant Steps,” “My Favorite Things” and “A Love Supreme.” With a style characterized as “sheets of sound”, he ranks among the best jazz saxophonists ever. Praising the subject’s rise from humble roots, Nat Hentoff cited his willingness “to practice more, to do all the things that somebody has to do to excel.”

11) This American artist is credited with reviving the art of the cut-paper silhouette in the 1990s, using the medium to probe issues of race, gender and power.

12) The 1936 Summer Olympics witnessed a remarkable feat of sportsmanship, when the German long jump champion and Olympic record holder (Luz Long) provided advice to this rival, who was in danger of fouling-out of the competition. The rival remained in contention and emerged victorious, with Long being the first to offer congratulations.

13) Occurring near the start of summer, this annual celebration commemorates General Orders, Number 3 (1865), which freed slaves in Texas. From there, the tradition spread throughout the South and remainder of the country.

14) Her Danse Sauvage made her an international star, as did her performance in Zouzou, the first Hollywood leading role for an African American woman. During World War II, she provided the French Resistance with intelligence overheard at performances. Addressing the March on Washington, she decried racism in her native land with the declaration, “I have walked into the palaces of kings and queens … But I could not walk into a hotel in America and get a cup of coffee…” 15) In 1959, Berry Gordy took an $800 loan from his family to found this company, whose headquarters displayed a sign that read “Hitsville U.S.A.” Over the next decade, it produced a staggering procession of music, with worldwide hits by the likes of Diana Ross & the Supremes, Stevie Wonder, Marvin Gaye and Smokey Robinson.

16) This African American artist worked in a variety of media but, in a 1988 obituary, was described as “the nation’s foremost collagist.” The subject is especially associated with Harlem, where he spent much of his life, and depictions of the area’s rich culture. He was a principal founding member of Spiral, an artists’ collective dedicated to the civil rights movement.

17) Born Eunice Waymon, she achieved global fame under this stage name. Acclaimed as one of the most talented vocalists of her generation, she was an active campaigner for social justice, with her music a significant backdrop to the civil rights movement. Inducted into the Rock & Roll Hall of Fame in 2018, her profile includes, “Her triumphant voice sang what it meant to be young, gifted and black in a sometimes unjust and troubled world.”

18) Born in Crockett, Texas, in 1935, Myrtis Dightman is considered the Jackie Robinson of this rugged athletic profession. During the 1960s and 1970s, he reached the US national finals seven times.

19) This actor originated the role of Troy Maxson in the 1987 debut of August Wilson’s Fences, winning the Tony Award for Best Actor. With a distinguished career in both theater and film, he is perhaps most famous for providing his resonant voice to an iconic screen character.

20) With his famous orchestra, this jazz legend toured the world for almost half a century until his death in 1974. He is universally regarded as one of the all-time great jazz composers, with hundreds of songs to his name, including “Sophisticated Lady, “In A Sentimental Mood” and “Don’t Get Around Much Any More.” As his biography at the Songwriters Hall of Fame notes, “His influence…simply cannot be overstated.”

21) He was the first African American staff photographer at Life. Over the next two decades, his work chronicled social ills – notably poverty and racism – and provided support for the Civil Rights Movement.

22) Born a slave, this American abolitionist dropped her birth name in 1843, when she embarked on a career as one of the most noted evangelists of her era. A fervent advocate for equal rights for women, she is especially remembered for an 1851 speech at the Ohio Women’s Rights Convention, with its famous refrain “And ain’t I a woman?” 23) This author’s first novel gained the 1953 National Book Award, the first won by an African American. In his acceptance speech, he spoke of his “dream of a prose…confronting the inequalities and brutalities of our society forthrightly, but yet thrusting forth its images of hope, human fraternity, and individual self-realization.”

24) Eddie Murphy praised this fellow comedian as “better than anyone who ever picked up a microphone”, a view confirmed by the subject topping Rolling Stone’s “50 Best Stand-Up Comics of All Time.” Regarding the subject’s mid-career transition, another famous comedian observed, “(he) killed the Bill Cosby in his act… it was the most astonishing metamorphosis I have ever seen. He was magniﬁcent.” 25) In April 1939, denied a venue due to segregation, this renowned singer performed at the Lincoln Memorial instead. Harold Ickes introduced her to the crowd of 75,000 with the words “Genius, like justice, is blind.” Among many other distinctions, the subject was the ﬁrst African American to perform at the Metropolitan Opera and received the Presidential Medal of Freedom in 1963.

26) Eulogizing this friend in 1988, Keith Haring wrote, “Anyone who lived in downtown Manhattan at this time (1979) was aware of the presence of Samo. The simple sentences sprayed onto buildings, bridges and crumbling walls appeared to be the utterance of some newborn philosopher.”

27) This noted sociologist addressed the challenges of the turbulent postCivil War era in his 1935 book, “Black Reconstruction in America.” He characterized the quest for “absolute equality” as “the last great battle of the West.”

28) At the 1992 US Open, 24 years after he won the event as an amateur on military leave, tennis royalty convened in support of this man’s Foundation for the Defeat of Aids. In addition to historic championships and ﬁve Davis Cup wins, the subject is remembered for his social activism, including outspoken opposition to apartheid. His International Tennis Hall of Fame bio refers to him as “the sport’s most elegant and thoughtful ambassador.”

And a closing thought…

Freedom is the continuous action we all must take, and each generation must do its part to create an even more fair, more just society.

2. Winning a medal at both the Summer and Winter Olympics