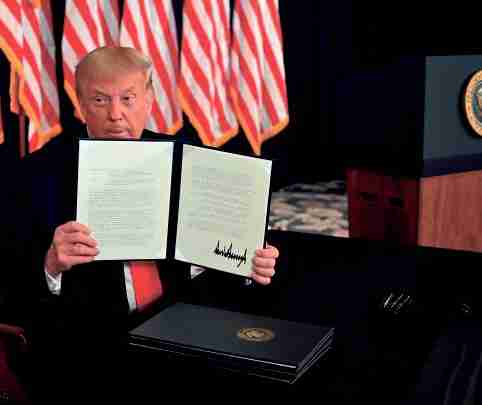 WASHINGTON – In a desperate attempt to boost his flailing reelection campaign, Donald Trump signed a flurry of (potentially unconstitutional) executive actions over the weekend at his New Jersey golf club. The result was yet another self-inflicted political wound for Trump in his never-ending quest to ﬁnd a magical message that will distract voters from his catastrophic failure to control the coronavirus.

While none of these new orders constitute sound public policy, perhaps none should be more concerning to the American people than Trump’s stated intention to go beyond his temporary deferral of the payroll taxes that fund important retirement programs like Medicare and Social Security and permanently “terminate” them if he wins a second term.

“If I’m victorious on November 3rd, I plan to forgive these taxes and make permanent cuts to the payroll tax,” Trump said. “In other words, I’ll extend it beyond the end of the year and terminate the tax.”

This is a disastrous decision on multiple levels. Let’s examine what’s at stake.

Most importantly, terminating the payroll tax would starve Social Security and Medicare of the funding they need to operate, inevitably resulting in ﬁnancial insolvency and cascading beneﬁt cuts — leaving the tens of millions of American seniors who rely on them out in the cold.

As CNN noted over the weekend, these life-saving programs were already in rough ﬁnancial shape as a result of Trump’s failure to address the pandemic. While the programs’ ﬁnances have long been troubled, “the crush of coronavirus-induced layoffs has only deepened the problem by slashing the amount of payroll tax revenue going into their trust funds.”

Experts and advocates were among the ﬁrst to sound the alarm over the calamitous consequences of Trump’s decision.

“A payroll tax holiday on top of a pandemic will have a signiﬁcant negative effect” on the futures of Social Security and Medicare, Richard Prisinzano of the Penn Wharton Budget Model told CNN. “This is just piling on.” Meanwhile, additional analysis from the Center for American Progress conﬁrmed that the move would “weaken the Social Security and Medicare trust funds.”

Of course, none of this is particularly new. Trump has repeatedly advocated for draconian cuts to crucial safety net programs throughout his presidency. But publicly doubling down on his long-standing support for cutting these popular programs right now — at a moment when he’s already more politically vulnerable than at any other point in his career — is likely to backﬁre in spectacular fashion.

While Trump’s continued attacks on these essential retirement programs certainly qualify as bad policy, they may be even worse politics. Trump’s threats to cut Medicare and Social Security have consistently registered as a top concern for voters and an effective line of attack for Democrats in our polling throughout 2020 — remaining salient even as coronavirus has dramatically shifted the national environment.

In February, we tested more than 100 different messages with battleground state voters to determine the most effective lines of attack on Trump. Out of dozens of options, calling out the massive cuts to Social Security and Medicare proposed in Trump’s 2021 budget (as outlined above) came back as the top-testing message, with respondents selecting it as a top concern 61% of the time — including 59% of the time among swing voters.

And voters’ distaste for these disastrous ideas has remained constant as the year has progressed. A similar message about Trump’s assault on Medicare and Social Security came out on top of a list of attacks in our May battleground poll, with 59% of all respondents and 65% of swing voters saying it raised major concerns.

And when we revisited the issue most recently in a late June survey, with the pandemic raging across the country, Trump’s attacks on Medicare and Social Security remained one of the toptesting messages:

Donald Trump has put the interests of insurance companies and drug companies ahead of what is best for average people — putting healthcare at risk and out of reach for millions of Americans in the midst of the coronavirus crisis. But instead of changing course, Trump is doubling down on plans to cut Medicare and Medicaid, and he is still trying to eliminate protections for people with preexisting conditions.

This was particularly true with new Joe Biden supporters — voters who planned to vote for the vice president, but who did not support him two months earlier. Eighty-two percent of these recent Biden converts said the message above raised major concerns, more than any other tested message.

Considering Trump’s abysmal track record, it should come as no surprise that battleground state voters now overwhelmingly favor Biden on the issue. In that same late June survey, respondents picked the vice president as the candidate they trust most to protect Social Security and Medicare by a double-digit margin, 46% to 36%.

The Bottom Line: Trump’s plan to terminate payroll taxes will gut Social Security and Medicare and put the lives and livelihoods of millions of seniors at risk. The American people are smart and they won’t be fooled by Trump’s desperate ploy to save his failing campaign. They know what’s at stake in this election — and they’ll vote like it in November.

Next post FUNdraising Good Times: If its August, its Black Philanthropy Month