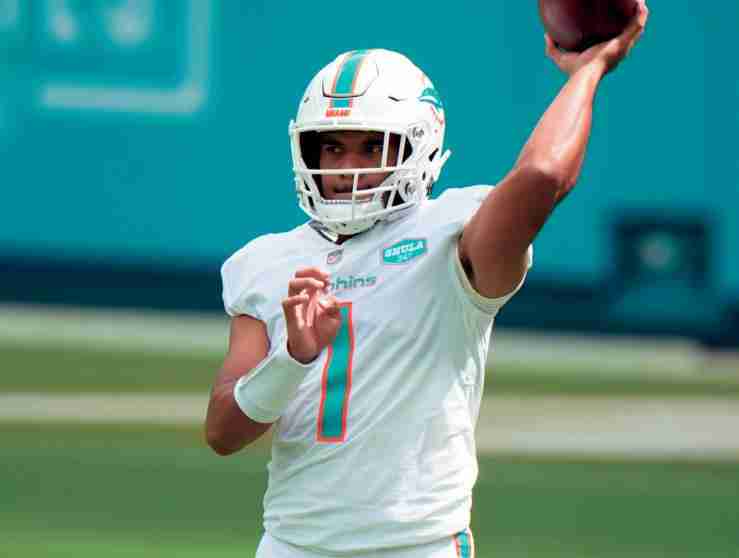 MIAMI (AP) – When asked Monday about the Miami Dolphins’ quarterback situation, coach Brian Flores paused for nearly 8 seconds before he answered. That was plenty of time to stir up even more speculation regarding when top draft pick Tua Tagovailoa might make his NFL debut.

Ryan Fitzpatrick threw two interceptions and had a passer rating of 66 in Sunday’s 31-23 loss to Seattle, which dropped the Dolphins to 1-3.

But it’s unclear whether the Dolphins believe Tagovailoa has learned the offense well enough to take over Sunday at San Francisco, and whether they’re ready to expose him to an NFL pass rush less than a year after a serious hip injury ended his Alabama career.

“Look, I understand where everybody is coming from with Tua,” Flores said. “I get all that. At the same time, he’s a young player. He’s coming off the injury. We’ll make the decision on the starter, but I would presume that’s going to be Fitzpatrick.”

Tagovailoa watched again Sunday while two other rookie quarterbacks, the Bengals’ Joe Burrow and the Chargers’ Justin Herbert, played well. Flores said that doesn’t factor into his thinking, and said his 8-second pause didn’t signal a QB change was imminent.

Switching to Tagovailoa would mean exposing his surgically repaired hip behind an offensive line with two rookies.

“He has checked all the boxes from a medical standpoint,” Flores said. “(But) the honest thing for me is if it was my kid and he had a serious injury like that, I wouldn’t want his coach to be rushed to throw him in there because of media pressure or anything like that.

“No one is going to pressure me into doing anything. When we feel like he’s ready to go, we’ll put him in.”

The Dolphins have lost 24 of their past 33 games, but Flores’ players seemed to take the latest loss particularly hard, perhaps reflecting that he has raised the bar regarding expectations within the locker room.

grinding. The only way is to work your way out of it.”

That’s worse than in 2019, when they allowed a franchise-record 494 points. “I’m not going to sit here and tell you we’re trash,” safety Bobby McCain said. “Because we’re not. We’ve just got to be better.”

Newcomer Byron Jones, the Dolphins’ highest-paid player, has missed the past two games because of groin and Achilles injuries. First-round draft pick Noah Igbinoghene struggled again Sunday, when he busted coverage on a 57-yard pass in the ﬁnal seconds of the ﬁrst half to set up a Seattle touchdown and was later beaten for another score.

DeVante Parker was plagued by injuries early in his career but has learned to play hurt. He went to the locker room early in Sunday’s game with an ankle issue, but returned and ﬁnished with a career-high 10 catches, the most by a Miami receiver since 2017, for 110 yards.

“As you get older, you realize it’s something you can play through,” Parker said. “Opportunity comes my way, I’ve got to make the plays, injured or not.”

Fitzpatrick took blame for the loss but said his arm was hit on both interceptions. He threw for 315 yards, ran for a team-high 47 and led an offense that totaled 25 ﬁrst downs, but Miami settled for ﬁeld goals on ﬁve consecutive scoring drives.

Jones returned to practice last week, and the Dolphins hope he can rejoin the lineup Sunday.

The Dolphins’ game Sunday at San Francisco (2-2) will be their ﬁrst there since 2012, and their ﬁrst on the West Coast since 2017.