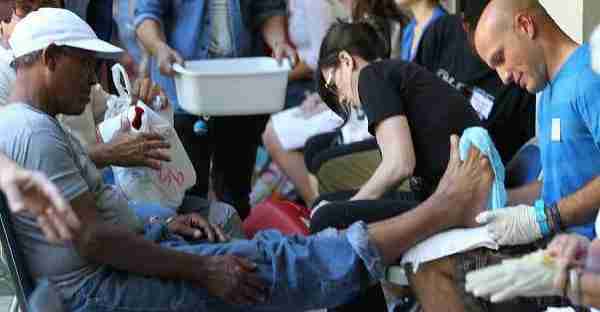 RICHMOND, Va. (AP) _ Meriam Macauley, a pre-dental student at Rutgers University, touched a thin, flexible fiber to points on the bottom of Ernest Wright’s freshly washed and dried feet. She was doing a screening test to see if he’d lost any feeling.

“You have to close your eyes. Relax your feet,” she said to Wright, 57, a regular at the Thursday lunch program offered by St. Paul’s Episcopal Church in downtown Richmond.

Wright said he is on his feet a lot, so he appreciated the attention from Macauley, who is enrolled in the Summer Academic Enrichment Program at Virginia Commonwealth University.

“I feel that. I feel that,” he repeated as Macauley moved the monofilament over the bottom of one foot, then the other.

During the six-week summer enrichment program, 55 students took turns staffing a foot health clinic at the church during its Thursday lunch program, which serves a free meal to those who show up, often people who are low-income or homeless.

There is symbolism in caring for the feet of others.

Jesus washed the feet of his disciples before the Last Supper in a show of humility and service to others. Centenary United Methodist Church, a few blocks from St. Paul’s, has a foot-washing ministry offered in conjunction with its Friday walk-in ministry.

Foot care, including washing, scraping and filing calluses, clipping toenails and massage, also had practical health applications in this case, said Dr. Michelle Whitehurst-Cook, associate dean of admissions at the VCU School of Medicine. Whitehurst-Cook runs the summer program with Cheryl Ford-Smith, an associate professor of physical therapy at VCU.

“We were serving the homeless, and the feet seem to be a big issue with them, because they’re walking all the time,” said Whitehurst-Cook, also an associate professor. During the school year, students in VCU’s Department of Family Medicine’s rural and inner-city preceptorship program work with Caritas, a homeless services organization in Richmond. They see a lot of foot-related ailments, some related to diabetes.

“They develop blisters and calluses. A lot of them have diabetes, so we’re worried about neuropathy. It’s important that they have good footwear to preserve their feet and that they have clean socks and have knowledge about how to take care of their feet. We hope to provide that so that they won’t have as much medical issues with their feet as maybe they’ve had in the past,” Whitehurst-Cook said.

To prepare for the clinics, the students learned basic foot care, practicing on one another.

“That was a particularly bonding experience. That was an unanticipated benefit,” Whitehurst-Cook said.

At the clinics, the college students also helped with taking blood pressures and blood sugar measurements.

“These are pre-health students, so they are getting a taste of what they would actually be learning if they were admitted to school,” Ford-Smith said.

The students also are learning to work together across disciplines. It wasn’t just pre-med students, but those who aspire to be dentists, pharmacists and physical therapists.

“The program has been really good to show how us as professionals can work together. It’s a team effort. . We’re just all professionals, helping everybody,” Ford-Smith said.

Ford-Smith said the students have noted some foot problems, such as open blisters that warranted further care, and referred those cases on. As she examined Wright’s feet, Macauley didn’t notice anything that required follow-up. Wright said he is not homeless and has a regular doctor.

“When they first told us we would be washing people’s feet, I was kind of confused as to the reason,” said Macauley, who hopes to attend the VCU School of Dentistry. “I understand it now, the importance. A lot of people neglect their feet. Neglecting your feet is not very safe for you because in your feet is where you can monitor diabetes, blood pressure, different sensations.

“I want to be a dentist, but all of it correlates to overall health,” Macauley said.

Wright and the others getting care also got new socks, purchased with donations, and gently used shoes.

“They love the socks. Socks are a big issue, more so than the shoes, getting clean socks. A lot of times they just throw away their socks and put on a new pair,” Whitehurst-Cook said.

“We give them the little tubs we washed their feet in, encouraging them to keep them and use them, fill with a little water in and wash their socks every few days if they can.”

As the Thursday clinic came to a close, VCU pre-med student Dung Nguyentran scraped calluses from the heels of a woman who said she had been homeless for about a week. She said she lost her job after she became ill and had to take time off.

“I’m just trying to get back on my feet again. Without my feet, I literally can’t do that,” she said. She was happy to get new shoes.

“Now I got a pair of shoes instead of just wearing flip-flops everywhere,” she said. “They’re almost my size.”

Next post Drone-based businesses take off in Traverse City area