University of Connecticut opening institute for brain and cognitive studies 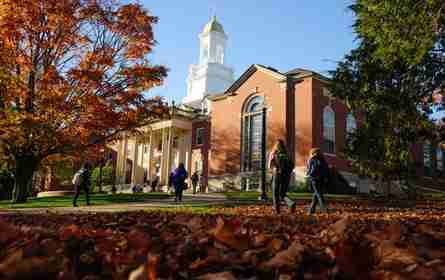 STORRS, Conn. (AP) _ University of Connecticut scientists researching everything from speech to genomics are coming together to become part of a new institute for the study of the brain.

The Connecticut Institute for Brain and Cognitive Science opens at the end of this month, when a $1 million state grant kicks in.

That’s part of about $15 million the school and state have committed over the next 15 years to fund new faculty positions, equipment, lab space, fellowship support for students and staff.

Scientists plan to study myriad issues there, such as what goes on in the brain of someone with dyslexia and how the brain rewires itself after an injury.

“It’s really an untapped frontier to try to understand the brain, because it is so complex,” said Mun Choi, the university’s provost.

The institute was conceived more than two years ago, when the school was forming an academic plan, and deciding where to invest limited resources. Officials identified brain and cognitive science as an area where UConn could become a national leader.

Alex Martin, a cognitive scientist at the National Institutes of Health, reviewed the initial proposal and concluded the school is an ideal place for a brain institute, because it already has leading experts in fields including neuropsychology and linguistics who are working on understand how the brain processes information.

“To my knowledge there are very few programs that operate on the scale proposed here,” he said.

Gerry Altmann, a former longtime editor of the journal “Cognition,” was recruited to be the institute’s co-director three years ago from the University of York in England. Martin said Altmann is widely recognized as an expert in cognitive psychology and cognitive neuroscience, which will help put UConn on the map.

Altmann said he was drawn by the idea of working across disciplines at a large school such as UConn, where scientists who study how people process language can work alongside scientists discovering how proteins inside neurons work in the brain to help produce behavior.

“What we’re interested in at UConn is understanding in particular kinds of behavior, what are the components in the brain _ areas or genetic influences or properties _ that may be involved in things like helping people recognize faces or sounds or letters,” Altmann said.

The school last month finished installing a specialized functional magnetic resonance imaging machine to help researchers understand what is going on in the brain. Subjects will be given tasks, such as reading, and the MRI will show through the flow of blood, how different parts of the brain are working together to perform that function.

“If we can get a better understanding in real time how the brain’s neuro-circuitry actually works and how to stimulate certain portions of the brain using stimuli such as radio waves, we can better pinpoint how the brain functions,” said Choi.

Previously, scientists from UConn would have to travel to schools such as Brown and Yale to do their imaging work.

The machine, which will come online later this year, has been installed in Communication Sciences Building. A permanent home for the brain institute is still a few years away, Altmann said.

“In the short term, we are putting together an infrastructure that will give faculty and students the time and funding to work across labs, departments and disciplines,” he said. “That way we build up a collaborative network that is already functioning, so that when we do have premises there is already a functioning structure to put there.”