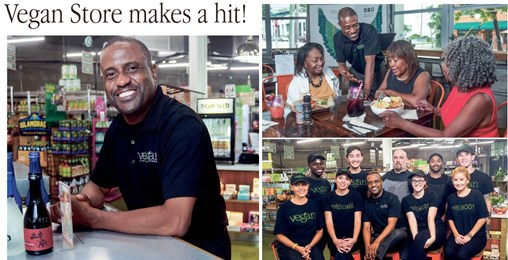 There’s the grocery store and market, there’s the cafe, and there’s also the health and beauty component, and it all seems to be a hit with customers throughout South Florida. In just 17 months, it’s done so well that the owner, Steven Smith, Ph.D., is about to reach his goal of making Vegan Fine Foods available as a franchise.

And amazingly the majority of his customer base is not vegan, but they like his food. His supermarket stocks more than 4,000 products, has turned over an impressive $1.2 million, serving more than 35,000 customers, of whom around 75% are not vegan. Now that he’s grown in leaps and bounds, you might soon enough find Vegan Fine Foods all over the world.

“It’s an ambitious goal, because we’ve only been in business for 17 months. It’s been amazing,” said Smith. “People started asking if we could open up a store in their city. So we’re working with a consultant and by the end of this month we’ll be open for franchisees. Franchise options include the entire Vegan Fine Foods market, Vegan Fine Café only and Vegan Fine Body (health and beauty products) only.

But if they want all three in one, such as in Fort Lauderdale, they do have that option. At the flagship store, customers can shop for groceries, or eat at Vegan Fine Cafe, where you can order your food and they’ll cook it to order and bring your plate to you, and then they have the health and beauty section, Vegan Fine Body.

Vegan Fine Foods was created to provide a one-stop shop for vegan and plantbased products, as well as the in-house café. The flagship store opened in Fort Lauderdale in March 2018. Vegan Fine Food Café launched in August 2018 and the company’s first private label product Vegan Fine Wines followed shortly in December that year. The company will officially become a franchisor this month.

Smith has launched an equity crowdfunder on WeFunder to raise additional capital of $1,070,000 for the expansion of his shops and product line. Equity crowdfunding allows members of the public to invest in small businesses in their early stages. “We anticipate that our investors will realize a significant return on their investment,” says Smith. “We expect that they’ll begin receiving dividends within two to three years. The other benefit is that invest in a company that will do more than its share to make the world a better place by supporting and increasing access to vegan foods and accessories to customers everywhere.”

Nowadays, Smith said it seems fashionable to become a vegan, but he started the practice not as a fad, but after suffering poor health from stress due to poor eating habits while working on his master’s degree and his Ph.D. “I spent seven years in graduate school and eating fast foods and Dunkin Donuts! I gained so much weight and I felt terrible. I decided to give up meats and dairy. I didn’t know much about being a vegan but I knew I had to change my diet. I started feeling much better as a result.” It was 1997 when he became a vegan.

Today he keeps a busy schedule because in addition to being owner and founder of Vegan Fine Foods, he’s also a professor of Business at Florida Atlantic University in Boca Raton and Davie. But he says he feels great, and people tell him he looks great too. And this is what he wants for the minority community as well. Because minorities suffer disproportionately to illnesses such as diabetes and high blood pressure and high cholesterol, Smith is hoping to put a dent in those ailments by introducing the public at large to better eating options. “We’re giving them a chance to open their minds. It’s a win-win for us, our health and a more sustainable way to live for people in our community,” says Smith. “This is the way we were intended to eat.”

Born and raised in the New York City metro area, Smith began his career as an engineer at corporate giants PepsiCo and Proctor & Gamble before completing an MBA and PhD at Rutgers University in New York to teach business full time. He has taught and conducted business courses in multiple states, territories, and countries, including the US, Jamaica, Puerto Rico, Brazil, Thailand, Singapore and South Africa in three languages: English, Spanish and Portuguese. He enjoys football, live music, and traveling the world experiencing new vegan products and restaurants.

But through Vegan Fine Foods, Smith is hoping to change the world –one vegan shop at a time. “This is my way of trying to make the world a better place.”

Details of the WeFunder equity crowdfunding campaign are at: