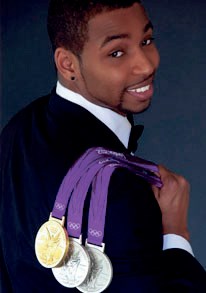 He was a teenager growing up in New York City, competing for the first time at higher-level meets where he stood out as one of the few Black swimmers.

“I definitely felt different,” Jones recalled in an interview this week at the U.S. Olympic trials. “When I was 15 years old, I finally won a big race. I beat this white kid. Well, his mom walked by and said, `Oh, shouldn’t you be playing basketball?’” Swimming worked out just fine for Jones, who will gladly show off his four Olympic medals – two of them gold – and three other medals he earned at the world championships during his long career.

Sadly, not nearly enough swimmers of color have followed Jones’ path, which stifles the sport’s ability to expand beyond the perception that it’s largely confined, at least in America, to wealthy, predominately white suburbs.

At the Olympic trials, where hundreds are competing for a trip to the Tokyo Games, it’s impossible to ignore that hardly anyone of color is diving in.

There are only a handful of exceptions, despite USA Swimming’s efforts to diversify its pool of athletes.

Simone Manuel became the first Black woman to win an individual gold medal in swimming at the 2016 Rio Games. Eighteen-year-old Torri Huske, whose mother is Chinese, looks like one of the rising stars of the U.S. program. And Natalie Hinds became the first Black swimmer to make this year’s Olympic team when she finished fourth in the 100-meter freestyle Friday night, locking up a spot in Tokyo as a relay swimmer.

In recent years, USA Swimming has devoted much of its attention to the “Make a Splash” initiative, which provides opportunities for more children, especially those in underserved communities, to learn how to swim.

But Tim Hinchey, president and CEO of USA Swimming, acknowledged that the racial unrest in the wake of George Floyd’s death brought to light that more needed to be done.

It’s not enough to teach Black kids to swim, though that’s a significant achievement that will serve them for the rest of their lives. Hinchey wants to make sure more kids of color view swimming as a potential avenue to college scholarships and athletic success at the highest levels. Even the Olympics.

“We’ve realized that we’re missing a piece,” Hinchey said, which is “finding ways to make swimming not just something that saves your life and something that’s a sport for life, which is important to all of us, but a way to convince young kids of any place, of any color, any shape, any size, any ethnicity, to know that swimming can be your sport.”

Over the next seven years, USA Swimming plans to divert funding that goes toward learn-to-swim programs into local clubs that are making strides to diversity the sport, such as the Chicago Park District swim team and the DeKalb Aquatics Tiger Sharks near Atlanta. The goal, according to Hinchey, is to have those two initiatives on equal financial footing by 2028.

“If we can open this up to more people, we’re a sport that would love to have more people in it,” he said. “That’s kind of our focus going forward.”

Another potentially important development occurred at the pool in the wake of Floyd’s killing by a Minneapolis police officer.

Jones, Manuel and other Black swimmers, such as Lia Neal, who recently retired after winning two Olympic medals during her career, joined together to form Team BLAC, the Black Leadership in Aquatics Coalition.

Jones said he had always strived to stay out of highly charged debates involving political and social issues. But as racial unrest spread across the country last summer, he decided he couldn’t stay silent any longer – especially when he was subjected to police profiling not more than 24 hours after Floyd’s death.

While out walking his dog in a predominately white neighborhood, a police cruiser went by.

“Suddenly, I hear screeching tires and he’s coming back to me,” Jones said. “I did not fit his description of who should’ve been in that area.”

Jones was able to diffuse any tension by talking about his dog. Still, he was shaken by the encounter. The fear he felt that day hasn’t gone away.

“I was blown away by that,” said Jones, pondering the potential impact on his 2-year-old child. “As a new father, I now have to teach my son how to verbally disarm someone with a gun.”

He called up Neal, a fellow New Yorker. They got in touch with other Black swimmers, including Manuel. The group enlisted the support of USA Swimming, which now has a section on its website devoted to diversity and inclusion, including a link to Team BLAC.

Neal said it was important for prominent Black swimmers to let those coming up through the ranks know, “Hey, we see you, we stand with you, we’re trying to do what we can do to help you.”

It was time, she said, to take a stand. “It’s so easy for athletes to just stay within the scope of their sport and not trudge into political territory,” Neal went on. “It’s a very iffy space. You don’t want to step on anyone’s toes. But this is just too important not to say anything.”

The burden of being a Black person in America, not to mention a Black swimmer, can take its toll.

After Manuel failed to make the U.S. team in the 100 freestyle Thursday night – which means she won’t get a chance to defend the historic gold medal she won five years ago – she revealed that she had been diagnosed with overtraining syndrome.

The racial tensions of the past year almost certainly contributed to her mental anguish.

“I do think that being a Black person in America played a part in it,” sad Manuel, who still has a shot to make the team in the 50 free. “This last year for the Black community has been brutal, and I can’t say that wasn’t something that I saw. It’s not something I can ignore. It was just another factor that can influence you mentally in a draining way.”

Now retired from swimming, Jones remains dedicated to breaking down the cultural stigmas that keep Black Americans from embracing the pool.

Much of that attitude can be traced to racial barriers that were placed in their way over the years, such as inner-city pools that closed rather than integrate or even more horrific incidents that made it clear they were not welcome. Long-term discrimination has undoubtedly contributed to the fear that many African Americans have about getting in the water.

Jones felt that from his mother growing up. After he nearly drowned at age 5, she insisted he get swim lessons. Recently, he added proudly, she ﬁnally agreed to take lessons herself.

“When someone knows how to swim, there’s not even a thought of not teaching that to their children,” Jones said. “We need to break the cycle of generational fear. All kids love to be in the water when it’s hot. But so many parents have their own fears. They treat the water like ﬁre. They’re like, `Ahh, it’s hot, stay away.’ Naturally, their kids build up a resentment of the water, too.” It undoubtedly helps for people of color to see others that look like them competing at the Olympics. Swimmers such as Jones, Manuel, Neal – and now Hinds – will certainly help to chip away at those racial barriers.

Next post Haiti in upheaval: President Moïse assassinated at home