Why they refuse to wear masks: Debunking 6 common objections 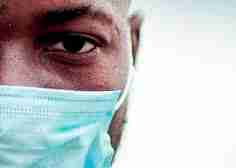 (Black PR Wire) – Aside from any theoretical beneﬁts that wearing a mask might have, we know it’s an important part of stemming the spread of COVID19.

Unfortunately, many Americans have been resistant to complying.

Healthline asked Levounis and Willard to respond to some common reasons given for not wearing a mask.

1. “Masks aren’t effective in preventing the spread of the virus” Levounis says it’s true that masks won’t protect you 100 percent.

However, they do give you some protection and, more importantly, they prevent you from spreading the virus to someone else.

Willard further points out that the greatest shedding of the virus occurs when we’re not yet having symptoms.

Wearing a mask will help us prevent spreading the virus to others during the period when we might not yet be aware that we have an infection.

2. “They’re too uncomfortable” Willard was quick to point out that, yes, masks are often uncomfortable — but so is getting sick.

Also, you, or someone you come into contact with, could potentially die.

To deal with glasses fogging up, Willard recommends putting some detergent on them to make them anti-fog like you would a snorkel. You could also make sure the mask is under your glasses, she says.

Willard further suggests making ear loops looser, or using devices like a headband to keep them off your ears. If possible, you can also limit the time that you do need to wear one by avoiding places where you’re in close contact with other people.

Finally, there are masks that tie behind your head and neck rather than going over the ears, she says.

3. “’They’re hard to breathe through, and I’m worried about carbon dioxide buildup”

Both Levounis and Willard say that, while masks can be hard to breathe through, we shouldn’t be worried about carbon dioxide building up.

“Limit the time you are wearing it,” Willard said.

“And they do allow air to come in and carbon dioxide to escape,” she added.

4. “I think people who are vulnerable should just stay home so the rest of us who are healthy can live our lives” “All of us should try as much as we can to be mindful of other people’s situations and must be considerate,” Levounis said.

“Not everyone has the resources to stay at home throughout this period. People need to empathize and not judge,” he said.

Willard adds that she ﬁnds comments like these to be “selﬁsh and probably ageist.”

“We need to be kind to one another,” she said.

5. “I should be free to do what I want” “The U.S. has made it a recommendation to wear masks because we are a country that takes our individual freedoms seriously,” Levounis said, “but in other places it is law because of how serious the virus is.”

6. “I think this is a conspiracy to make Trump look bad”

“It is deﬁnitely not,” Levounis said. “The virus killing people is very real.”

Willard added, “People are dying and are sick. People are not intentionally getting this virus.”

She suggests that people should get the facts from credible sources, learn about epidemics and data, and form their own conclusions.

“Anytime there is something we cannot control or understand, we think it is a conspiracy. This is not,” Willard said. The bottom line…

Wearing a mask helps prevent the spread of COVID-19 by containing the droplets that are released during speaking, coughing, and sneezing.

New research suggests that an added beneﬁt of wearing a face mask may be that it encourages people to physically distance themselves.

Unfortunately, many Americans have been resistant to wearing masks, despite the beneﬁts.

Experts say it’s important to educate ourselves about the facts so we can draw our own conclusions.

It’s also important to be kind and considerate of the needs of others.