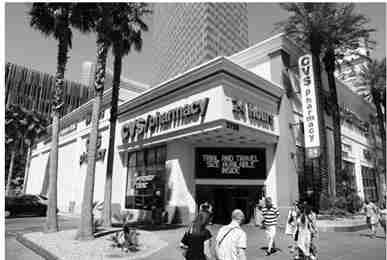 NEW YORK – A drugstore chain that used to hawk cigarettes behind the front counter now wants to offer nutrition advice and work with your doctor to keep you healthy.

CVS Health says it wants to use its roughly $69 billion acquisition of the insurer Aetna to dive deeper into managing customer health, with its nearly 10,000 stores becoming “front doors” for care. The companies plan to expand the health services offered through CVS locations and get more involved in helping patients stay on their medicines or manage their chronic conditions.

The deal announced Sunday will pair the second-largest U.S. drugstore chain with the third-largest health insurer. Here’s how it will likely play out.

Q: How will stores change?

A: The deal pushes CVS further down a path it started years ago when it began adding clinics to its stores and later quit selling tobacco. Over time, CVS plans to bulk up the health care services it offers through its stores and the space it devotes to them.

The company already has started testing vision and hearing aid centers at 15 and 32 locations, respectively. It also does blood draws and monitor chronic conditions like high blood pressure at certain stores.

The company might add to the 1,100 clinics it operates, expand into selling more medical equipment or offer nutritionists to counsel customers.

CVS leaders think its vast footprint — nearly 70 percent of the U.S. population lives within three miles of a CVS pharmacy — gives it an opportunity to build a deeper relationship with customers. Q: Are they trying to replace my family doctor?

A: CVS wants to complement doctor care, CEO Larry Merlo said Monday during a conference call to discuss the deal.

For example, Merlo said people with diabetes typically see their doctor several times a year, but may have trouble sticking with a treatment plan. The company said it can help patients stay on a plan, using its network of pharmacists, clinics and other future services.

“We’re in the community, we’re seeing those patients. We’re becoming part of their daily lives and routines,” he said.

Q: Will this make my prescription drugs cheaper?

A: Not in the near term, according to Edward Jones analyst John Boylan.

The deal doesn’t change how drugs are priced. It just puts key players in that negotiation — drugstores and pharmacy benefits managers — under the same roof as an insurer, Boylan said.

CVS processes more than a billion prescriptions annually as one of the nation’s largest pharmacy benefit managers, running prescription drug coverage for large clients like Aetna.

Over time, a bulked-up CVS may gain some negotiating power over prescription prices, but it’s hard to say whether that will translate to lower prices for consumers.

The deal could make other care elements cheaper, especially for Aetna customers who might get incentives like no co-payments to encourage use of CVS clinics for basic, nonemergency care. Q: What’s the business case for this deal?

Aetna will operate as a separate brand inside CVS. The deal also will help CVS keep competitors from poaching its 22 million customers.

Retailers like CVS face growing online competition, especially for the consumer products they sell outside store pharmacies. By adding more services, the drugstores will be selling something customers cannot buy online.

CVS also hopes to get customers to use its stores and services more. Drugstores have learned that customers aren’t particularly loyal to one chain and will fill their prescriptions where their coverage tells them or where they can get the best deal.

“I’m not going to leave my job just because they took CVS out of my network,” Jefferies analyst Brian Tanquilut said. Q: When will this deal close?

A: The companies expect that to happen in the second half of next year. However, it still has to pass federal anti-trust scrutiny.

Aetna has a rough record with that. The Department of Justice sued to stop its roughly $34-billion acquisition of fellow insurer Humana. That deal fell apart earlier this year.

CVS and Aetna both offer Medicare Advantage prescription drug coverage, and some of that may have to be sold to address antitrust concerns. Overall, the businesses of Woonsocket, Rhode Island-based CVS Health Corp. and Hartford, Connecticutbased Aetna Inc. have much less overlap than other deals that have been swatted by regulators.

Next post BitCoin: The Gold Rush of the new millennium?

Previous post IOC: Russians can compete at Olympics, but without flag