Alternative treatment for women with fibroids 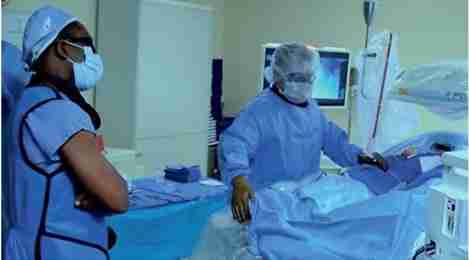 UFE is also called uterine artery embolization and is a minimally invasive alternative to a hysterectomy or myomectomy. UFE relieves fibroid symptoms in 90% of women treated. Symptoms may include an extended duration of heavy menstrual bleeding, oftenagonizing pain, fatigue and more.

“I didn’t know what was happening,” said Latoria Sheppard, 41, of Pompano Beach. “I was always bleeding a lot during intimacy. I knew something was wrong. I went to my gynecologist, who referred me to Dr. Julien.”

William H. Julien, M.D. is an expert in vascular and interventional radiology.

“For most women, Uterine Fibroid Embolization is a life-changing procedure,” said Julien, who is a pioneer in the field. “Many women have never even heard of uterine fibroids, and they are needlessly suffering.”

After learning about UFE, Sheppard was ecstatic.

“I learned about uterine fibroids and how to treat them. I couldn’t be happier with the results and I was able to save my uterus,” Sheppard said.

The UFE procedure is performed in-office, so patients avoid the hospital and spend the night in the comfort of their own beds.

FAR FROM A RARE DISORDER All women are at risk of developing fibroids. The growths typically form between ages 30 and 40, though they may develop in women who are in their twenties.

By age 50, between 70% and 80% of all women will have had fibroids. Without treatment, it is common for fibroids to shrink over time or stop growing altogether. This is especially common during and after menopause.

Uterine fibroids are the most common tumors of the female genital tract. They are benign, non-cancerous growths that are found in or on the walls of the uterus. The fibroids can range from less than an inch to more than six inches in diameter. Most fibroids cause no symptoms and are discovered only when a woman has a routine pelvic examination.

A doctor may use one of several types of imaging technology, including ultrasound, saline infusion sonography, magnetic resonance imaging (MRI), x-rays, or computerassisted tomography (CAT scan). However, even with an examination only about onethird of the fibroids are large enough to be detected. Ultrasounds are adept at detecting small fibroids.

FIBROID SYMPTOMS MAY INCLUDE: • heavy, prolonged monthly periods, sometimes with clots, • fatigue, secondary to a low blood count, • pain or pressure between the hip bones or in the back of the legs, • pain during sexual intercourse, • frequent need to urinate, • constipation or bloating, and • an enlarged belly.

WHAT TO CONSIDER Before considering treatment, the doctor will focus on several things, including age, general health, the severity of the symptoms, the location of the fibroids, and the type and size of fibroids.

The doctor will also consider whether the patient is currently or intends to get pregnant in the future.

Some women are concerned fibroids will affect their ability to have a baby, but the good news is that many women with fibroids can get pregnant naturally.

However, if the patient has submucosal or intramural fibroids, current research indicates she might have difficulty getting pregnant, even with in vitro fertilization.

Even if the patient does not have those fibroid types, pregnancy complications can result, including miscarriage, preterm delivery, abnormal position of the fetus and the need for a C-section delivery.

Emotional support is critical for dealing with problems associated with fibroids. Women can find help, however. There are excellent support-groups, which can help people understand the emotional aspects often associated with the disorder. It may be beneficial to speak with other women who have fibroids, or communicate with a social worker, psychologist or other mental health professional.

WHAT TO EXPECT The doctor starts by making a tiny nick in the groin area, then inserts a catheter into the femoral artery. Using x-ray imaging, the catheter is guided into the arteries that supply blood to the uterus.

The doctor then injects tiny particles – the size of grains of sand – into the uterine arteries to block blood flow to the fibroid.

By blocking the blood flow, the doctor is able to shrink the fibroids or destroy them.

Following the procedure, many women resume light activities in a few days, and a majority of women are able to return to their normal activities within ten days.

EDITOR’S NOTE: According to some sources, as with all surgeries, UFE does come with some risks including: Non-target embolization, transient amenorrhea (absence of a women’s menstrual period), common short-term allergic reaction/rash; vaginal discharge/infection, possible fibroid passage, post-embolization syndrome (post-procedure pain, fever, tiredness, and elevated white blood cell count), and premature menopause. While the effects of UFE on the ability to become pregnant and carry a fetus to term are not fully understood, UFE is typically offered to women who no longer wish to become pregnant or who want or need to avoid having a hysterectomy,