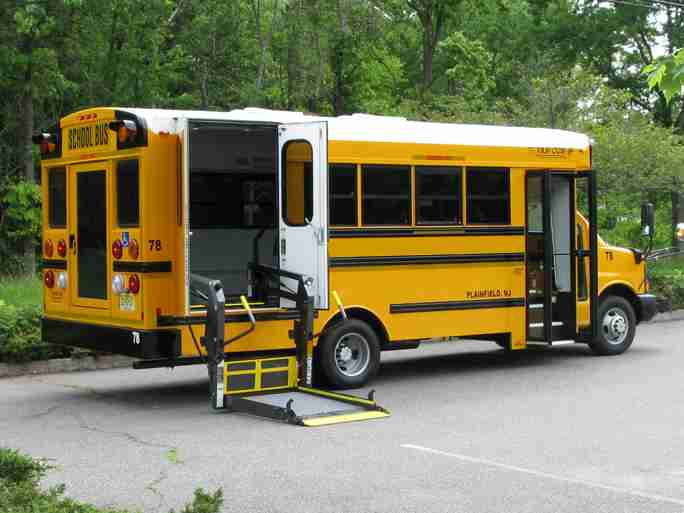 A major hit on school budgets could mean less for new or replacement equipment and supplies, like this wheelchair accessible school bus.

For school districts still getting their financial footing after the Great Recession, the Medicaid changes being advanced as part of the health care overhaul are sounding familiar alarms.

Administrators say programming and services even beyond those that receive funding from the state-federal health care program could be at risk should Congress follow through with plans to change the way Medicaid is distributed. They say any reduction in the estimated $4 billion schools receive in annual Medicaid reimbursements would be hard to absorb after years of reduced state funding and a weakened tax base.

“If they have less Medicaid money, something’s going to go away,” said Randy Liepa, superintendent of the Wayne County Regional Education Service Agency, which works with 33 school districts in the Detroit area. The agency covers about 21,000 children with special needs who are on Medicaid and it helps districts recoup about $30 million annually in reimbursements.

Districts would have to look at non-mandated positions and programs if forced to bear more of the costs for services for poor and disabled students required by federal law, said Thomas Gentzel, executive director of the National School Boards Association.

The Senate is up next in efforts to do away with President Barack Obama’s health law, and school leaders are watching to see whether the changes advanced by the House survive. The House bill would transform the open-ended federal entitlement, which reimburses schools a percentage of the cost of the eligible services they provide to poor and disabled students, to one where reimbursements will come in a fixed, per-person amount.

But, said Kriner Cash, superintendent of public schools in Buffalo, New York, “individual student care comes with highly variable costs, especially in the case of students with disabilities.” In the school district, more than 80 percent of students are low income and 22 percent have disabilities. The district gets about $2.5 million annually from Medicaid.

In March, a Congressional Budget Office estimate for an earlier version of the House bill found that federal Medicaid subsidies to states would be $880 billion less over 10 years.

President Donald Trump’s administration argues that states will get more freedom to experiment with the program and make sure that people who rely on Medicaid get the care and coverage they need.

Medicaid spending is “not getting out of control because of schools, because schools are getting less than 1 percent of the dollars,” said Sasha Pudelski, assistant director of policy and advocacy at The School Superintendents Association. “It’s not kids who are breaking the bank.”

An association survey polling 1,000 school leaders reported that schools spent two-thirds of the money to support specialists, from school nurses and social workers to speech pathologists.

The association, as part of a coalition of more than 50 school and child health advocates, warned congressional leaders in a recent letter against shifting more costs to states and in turn, local communities. They said that would lead to cuts in services and benefits to children, especially in districts with high poverty rates.

“A lot of districts have never really covered from the Great Recession, they’re still in it,” Gentzel said, “and some states have not restored their funding. I think it’s the context of all of this that’s almost as important as the story about Medicaid.”

Opponents of the changes say these are potential impacts:

Students needing to check their temperature or searching for a tampon may not be able to walk down the hall to see a school nurse. Health professionals such as nurses, physical therapists, speech pathologists, social workers and psychologists may be forced to rove between schools, outsourced or have some of their duties taken on by administrative staff.

“There are health barriers to students getting their education,” said Donna Mazyck, executive director of the National Association of School Nurses. Individualized Education Plans mandated under federal law may require nurses to give medication and tend to feeding tubes and tracheotomies. “That service won’t be done if Medicaid isn’t paying for it,” she said.

Behavioral issues in the classroom are often addressed with counseling through social workers and psychologists. Schenectady City School District in New York, where a majority of students live in poverty, has had a dramatic increase in the number of social workers at its schools dealing with mental health issues. “They’re all front-line responders to kids in crisis,” Superintendent Laurence Spring said. He said they counsel kids traumatized by domestic violence and street crimes and others who experience anxiety from not having enough food at home. The district files for about $2 million in annual Medicaid reimbursements.

When schools host campus-wide preventative screenings, for everything from vision, hearing, asthma and mental health, some costs are recouped based on the number of Medicaid-eligible students who are treated. Advocates say that vulnerable children may not have access to such preventative services outside of school, but the screenings can catch health issues before they become more serious.

Liepa, from the Detroit-area agency, said children living in poverty regularly come to school facing significant impairments to their health and with little or no support at home to address them, which ultimately affects learning. “It’s no different than if they’re coming in hungry, which is supported by the federal lunch program.”

School districts often direct and assist students’ families with resources, such as helping them sign up for Medicaid or referring them to an eye doctor for glasses. Some hours spent on these administrative tasks are reimbursable by Medicaid.

Poquoson City Public Schools in Virginia spend some of their $35,000 in annual reimbursements for events targeting children who aren’t even in school yet, in hopes of getting families resources as early as possible. “It’s a jump start for kindergarten. If we can get some services, with disabilities, at an early age, they’re likely far more successful in the years with us,” Superintendent Jennifer Parish said.

A major hit on school budgets could mean less for new or replacement equipment and supplies. That could affect things such as outfitted buses, assistive devices and other items for children with special needs so they can be in school. This could trickle down to non-mandated items such as special science lab materials or theater club costumes for general education students.

Liepa said the Medicaid money has helped school districts afford programs and operational costs, from upgrading buses to buying new textbooks, while balancing their budgets. “It’s been a life-saver for school districts. It’s one less thing I have to worry about or think about reducing,” he said.

Optional but highly popular programs for students and families, such as sports, clubs and after-school activities, could be slashed, as the offerings are generally the first to go in a budget crisis.

“Most districts have long picked the low-hanging fruit in their budgets,” Gentzel said.