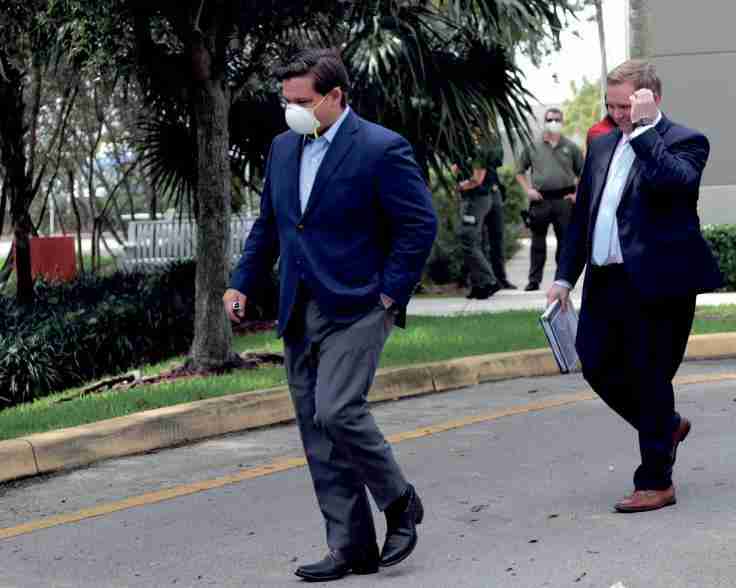 Tallahassee, Fla. (AP) _ Gov. Ron DeSantis appointed some of Florida’s most powerful political leaders and business executives Monday to a committee that will map out the state’s reopening from the coronavirus shutdown that has crippled much of the economy.

DeSantis told the committee they will meet daily by phone through Friday, when he hopes they will have recommendations they can present. There will also be subcommittees that will report to the executive committee.

The state’s largest economic sector, tourism, has crashed and most of its largest employers have shut down because of the crisis, including the theme parks and cruise lines. Restaurants have been limited to takeout and delivery and nightclubs have been closed. More than 650,000 workers have ﬁled unemployment claims since March 15, according to the state.

DeSantis told the committee the state will reopen in stages and not all at once. He said a key will be the ability to test workers for the disease and get quick, accurate results.

“If you have somebody in a business and they get tested and you get results in six days, that’s not efﬁcient and effective,” he said.

The Florida Democratic Party criticized DeSantis’ selections, saying it is the “expected cadre of donors and DeSantis loyalists.” It also blasted him for not appointing Agriculture Commissioner Nikki Fried, the only Democrat elected statewide, while including the two Republican members of the cabinet, Attorney General Ashley Moody and Chief Financial Ofﬁcer Jimmy Patronis.

“Fried oversees the second largest economic driver in the state and she should have a seat at the table,” party chair Terrie Rizzo said in a statement. The state has had more than 27,000 conﬁrmed coronavirus infections with at least 823 deaths. About 4,000 people are currently hospitalized.

DeSantis criticized the media for citing experts who were predicting last month that Florida could see a much larger wave of deaths and hospitalizations than materialized, but those forecasts were based on his unwillingness at that point to issue a statewide shutdown.

At his April 1 news conference where he announced the statewide stay-at-home order, DeSantis didn’t dispute the projections. Asked about them at the time, he said, “This thing is really nasty.”

“Well, that hasn’t happened,” DeSantis said Monday. “Not only are we not overwhelmed, we have a tremendous amount of (hospital) capacity.” Meanwhile, patrol deputies in hardhit Broward County overwhelmingly voted no-conﬁdence in Sheriff Gregory Tony. The 1,400-member Broward Sheriff’s Ofﬁce Deputies Association announced Monday that its members voted 693-93 against Tony. He was appointed to the post by DeSantis in 2019 to replace Scott Israel, whom the governor ﬁred from the elected post for his handling of the 2018 Marjory Stoneman Douglas High School massacre that left 14 students and three staff members dead.

Tony earlier this month suspended the union’s president, Jeff Bell, from the force after Bell penned a column in the Fort Lauderdale paper accusing the sheriff of not providing deputies with enough protective gear. The column came four days after Deputy Shannon Bennett died of COVID-19.

The union is one of seven that represents the sheriff’s ofﬁce’s 5,600 employees.

“We believe this `response’ to the COVID-19 threat is inadequate and appalling,” said Frank Voudy, the union’s secretary-treasurer.

Tony issued a statement saying he and his command staff “have worked tirelessly” to protect the deputies and other employees, but said to the union’s members, “I hear your concerns.”

“It’s time to unite and work together to continue providing the highest level of professional public safety services to our Broward County community,” he said.

Tony and Israel, both former Republicans, are seeking the Democratic nomination for the ofﬁce in August’s scheduled primary. Broward County is heavily Democratic.