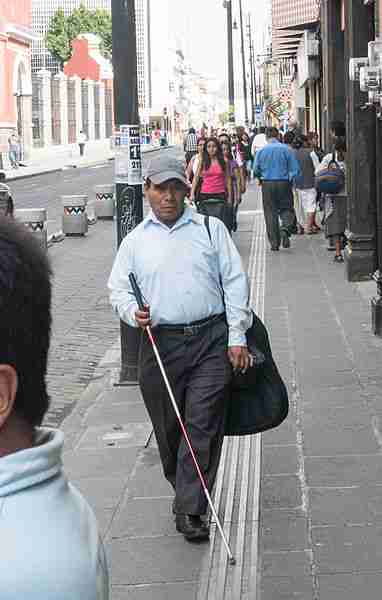 By BLAIR EMERSON
The Bismarck Tribune

BISMARCK, N.D. (AP) _ A few years ago, Paul Olson was working full-time as a mobility specialist, helping blind children and adults across the state.

At that time, there was a young girl from the Minot area whose father had built a playhouse in the backyard on a grassy hillside. The girl tried to climb the hill to get to the playhouse, but her white cane would constantly get stuck in the grass.

“We worked and worked and tried to find a solution for her to get out there with her sister, but it wasn’t going as well as I liked,” said Olson, who worked as a mobility specialist for more than 20 years, teaching travel safety to people who are blind or visually impaired.

For years, he’s worked with individuals who live on dirt roads, in small towns without sidewalks, and in other rural settings.

He met an older man living on a farm who had a hard time getting to the end of his driveway each day to get the mail. His white cane would get stuck and didn’t glide easily over the rough driveway.

“If you’ve ever seen someone walking down the sidewalk, they move (a white cane) from side to side; and it’s pretty obvious what it’s doing, but it just doesn’t work that well in a rural setting,” said Olson, who is now the superintendent of North Dakota Vision Services and School for the Blind, a state agency that provides services, mainly outreach, for more than 300 children and 200 adults.

Recently, he developed a device to help those who are blind maneuver over rough terrain, snow, gravel and grass.

The Dakota Disc – which resembles a small plastic Frisbee – attaches as a cane tip and can move at an angle, gliding over a variety of surfaces without getting stuck. It can twist and self-correct; and when it transitions between grass and gravel, it makes a sound alerting the user, The Bismarck Tribune (http://bit.ly/2fATrDT ) reported.

Olson took a prototype to Ambutech, a cane company based in Winnipeg, Manitoba – not too far from his agency in Grand Forks, he said.

The Dakota Disc is meant to help people living in rural areas who may not have paved walkways. When Olson was developing the device, he identified a perfect candidate who could benefit from it, Cole Roberts.

Roberts grew up in Bismarck and lost all of his sight in first grade due to glaucoma and WAGR syndrome. He carried on, earned a black belt before middle school, and he competed on his high school wrestling team. Now, he’s a student at Bismarck State College.

Olson said Roberts was his “guinea pig” as he tested prototypes. During product development, Roberts said he told Olson about the issues he had with his white cane getting stuck in sidewalks and jabbing him. He thought the new cane tip would be helpful when stepping off concrete and into snow, grass or gravel.

Last month, Olson gave Roberts a final version of the Dakota Disc to try. The first time Roberts used the device, Olson took him outside to a sidewalk with a two-foot snowbank.

“It just glided right over,” said Roberts, adding that without the disc, he would have to jerk his cane out of the snowbank after walking four or five feet.

Roberts, who’s studying to become a care pastor, said he’ll use the saucer-shaped tip when he goes outside or walks around downtown. At school, he’s mainly in two buildings separated by a skywalk, so typically he’s not walking around outside on campus.

Olson said he didn’t take any compensation for creating the Dakota Disc, due to his role working for a state agency and working on it with students, including Roberts.

He said he’s sharing the device with the network of mobility instructors in the United States and Canada, many who work in similar rural areas, and said he’d like to increase awareness of the device, which has been on the market since spring.