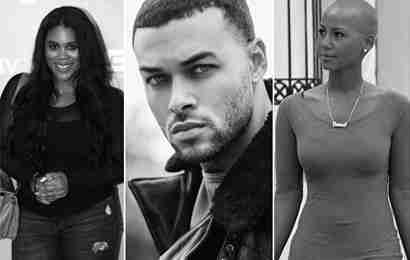 LOS ANGELES – The AIDS Healthcare Foundation (AHF) recently announced the launch of the Know Your Status Tour (KYST), a multi-city youth awareness campaign geared towards educating college students on the importance of safer sex, taking the proper precautions to avoid contracting STDs and, if already infected, how to be treated and continue living a productive life day to day.

The AHF Youth Task Force will team up with social media influencers and pop culture influencers Nina Parker, Karen Civil, Don Benjamin, Amber Rose, Sibley, Cordell Broadus, Jacquees and others to reach college students across the nation while on tour.
The highly anticipated KYST kicked off on Wednesday, April 12 at Florida Agricultural and Mechanical University (FAMU) in Tallahassee, Florida, with second and third stops at Clark Atlanta University in Atlanta. GA on Thursday, April 20 and Texas Southern University in Houston, TX on Wednesday, April 26.

Chris Grace, founder of AHF’s KYST initiative, creatively meshed the worlds of social impact with sexual education on the tour by selecting respected influencers to create an environment of comfort and familiarization who will encourage open dialogue.

“Each year, 12 million young people contract an STI (Sexually Transmitted Infection) and there is an undeniable urgency to target safer sex messages that are interactive, engaging and relevant to their lives and experiences. With the Know Your Status Tour, we are doing our part to educate our youth on the importance of being tested regularly for STIs and help them form good sexual health habits that they can take with them long into adulthood,” Grace explained.

Students who participate in STD and HIV testing will receive a custom t-shirt and be eligible to win prizes including: a $5,000 student scholarship, Pimp My Dorm Room for participating schools and a tablet giveaway for each campus.

• 10 million young adults in the U.S. alone contract an STD each year. • Chlamydia and Gonorrhea are the most commonly reported STDs in the U.S.

• One in four sexually active young women are living with an STD.

AHF is the largest global AIDS organization. It currently provides medical care and/or services to over 700,000 individuals in 36 countries worldwide in the U.S., Africa, Latin America/Caribbean, the Asia/Pacific Region and Eastern Europe.

To learn more about The KYST and AHF Youth Task Force, visit www.KnowYourStatusTour.com.