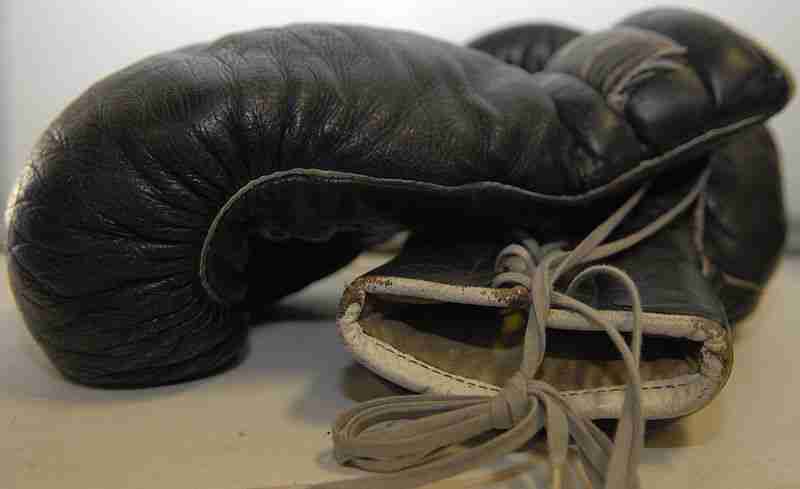 After practicing the four-part combination, the former firefighter moves to other stations at Higs Gym in Central Point, pounding a heavy bag, working the speed bag and perfecting other two- to seven-punch combinations.

It’s a mentally and physically challenging workout for anyone, but Duelley is also coping with Parkinson’s disease – a neurodegenerative brain disorder that worsens over time and causes tremors, slow movements, stiffness and impaired balance and coordination.

Duelley is fighting back against the disease through the non-contact Rock Steady Boxing program offered around the world, including at Higs Gym, for men and women with Parkinson’s. Participants don’t get hit in the face or body, but they do get to dish out punches, reported the Mail Tribune (http://bit.ly/2loHUqH).

“I love the class. Everyone is at a different stage of Parkinson’s. I’m at the beginning stage,” says Duelley, who was diagnosed six months ago but felt symptoms coming on before then. “We help each other. That’s the neat thing about it. There’s nothing to be uncomfortable about. We’re all dealing with the same stuff.”

Duelley says he works out six days a week, but boxing offers more than the aerobics, weightlifting and running he normally does.

“I work up a sweat doing this. It’s a completely different exercise altogether,” he says.

The disease causes the malfunction and death of vital nerve cells in the brain called neurons. As the neurons die, they stop producing dopamine, a chemical that sends messages to the part of the brain that controls movement and coordination, according to the Parkinson’s Disease Foundation.

Although there is no cure, research shows people who exercise at least 2.5 hours per week can slow the progression of the disease and improve their quality of life, the National Parkinson Foundation says.

Other research shows benefits from forced, intense exercise in which Parkinson’s patients are pushed beyond their normal comfort zones.

“It’s so important to have an instructor engaging with you and motivating you and pushing you beyond what you think your capabilities are,” he says. “Getting on a treadmill is not going to do it. With boxing, your brain is constantly engaged in the process. With a treadmill or rowing machine, you’re just going through the motions. The Rock Steady Method is retraining the brain to communicate with the body.”

Higinbotham and Higs Gym Manager Kim Adams hopped on a plane and flew to Indianapolis to attend a Rock Steady Boxing Training Camp after Parkinson’s patient Don Todd told them about the program. They became certified coaches and launched the program in the Rogue Valley in October 2016 with Todd as the first participant.

“I’ve been really impressed and inspired with how hard they work,” he added about the class members. “They’re giving it 100 percent effort and it’s paying off for them.”

Pete Cislo, a former school administrator in Central Point and Ashland, was diagnosed with Parkinson’s four months ago but believes he’s had the disease for six years.

The disease can be difficult to diagnose, especially in its early stages when symptoms are mild, according to the Parkinson’s Disease Foundation.

Cislo says sometimes he doesn’t feel like coming to the boxing class, but always feels better when he does.

“I love it. It’s a great program. The collegiality is great,” he says. “We all have the disease but we want to slow it down. One of the best things for me is finding balance – physically and mentally. Knowing someone else is in the same boat as you is important. Everyone here knows each other’s name. It’s just fun.”

Some people live with mild symptoms for many years, while others develop movement problems more quickly. In advanced Parkinson’s, patients have great difficulty walking and may be confined to a bed or wheelchair for most of the day, according to the Parkinson’s Disease Foundation.

Cislo is trying to stay positive and is perfecting a series of jokes and one-liners about Parkinson’s. He says the diagnosis has strengthened his bonds with family and friends. A former colleague invited him to lunch, and 15 teachers from Ashland High School showed up to see him.

“I found out how much I’m loved by people,” he says.

Betty Shorb, wife of class participant Richard Shorb, said her husband had to give up motorcycling and other activities because of the disease he’s had for 10 years. He’s been attending Rock Steady Boxing classes for just two weeks, but already she sees a difference.

“He looks forward to coming. He’s not so depressed. He’s more talkative after class and he has a better outlook on life,” she says while watching her husband from the sidelines with other family members and caregivers of participants. “I’m thankful we have this to go to. The ladies and I all talk about our troubles.”

According to the National Parkinson Foundation, depression and anxiety are the top factors impacting the overall health of patients.

“The first night my dad came, he was accepted. It’s like a pack. There’s such a sense of being on a team. The diagnosis gives them that instant bond,” Ronda says. “I’m so proud of these guys. It gives my dad something to look forward to.”

She adds, “Parkinson’s takes something from the person who has it – but a class like this gives it back.”