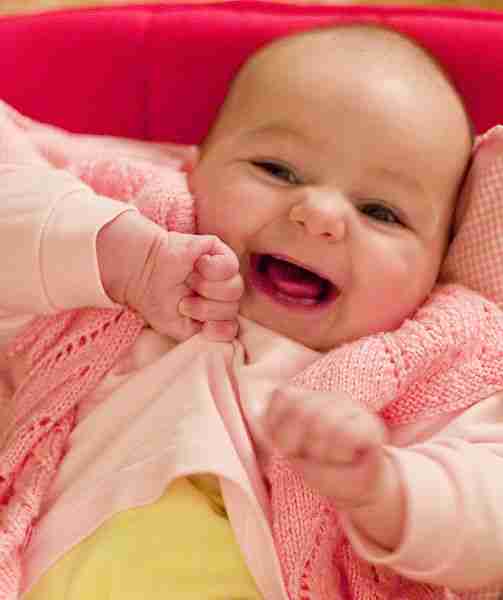 WASHINGTON (AP) – Even infants can have conversations with mom or dad. Their turn just tends to involve a smile or some gibberish instead of words. That’s a key lesson from programs that are coaching parents to talk more with their babies – and recording their attempts.

At issue is how to bridge the infamous “word gap,” the fact that affluent children hear far more words before they start school than low-income kids. New research suggests intervening early can at least boost the words at-risk tots hear, and maybe influence some school-readiness factors.

One program in Providence, Rhode Island, straps “word pedometers” onto tots to record how many words a day they hear from family or caregivers – not TV. Another in New York City records video of parents practicing conversation strategies with babies too young to even say “Da-da.”

“Parents say: `Wow, look what I did there. I made a sound and my child smiled at me,” said Dr. Alan Mendelsohn of New York University. “The power in that is really something.”

The research was presented Friday at a meeting of the American Association for the Advancement of Science in Boston.

Scientists have long known the power of simply of talking to babies – the sooner the better. A landmark 1995 study found that poor children hear a fraction of the words their peers in wealthier homes do, adding up to about 30 million fewer words by age 3. The reasons are myriad. If mom’s exhausted from two jobs, she’s less likely to read that extra bedtime story or have time to explore “this little piggie” when putting on a tot’s socks.

Those children have smaller vocabularies and lag academically, and can find it hard to catch up. That’s in part because early experiences shape how the brain develops in those critical first years of life.

Programs are popping up around the country to spread the “let’s talk” message. There’s little data on which interventions really work. But researchers outlined some promising early findings Friday – and noted the problem is about more than word quantity.

“Yes, you can talk more, but what is the quality of your language?” said Caitlin Molina, executive director of the Providence Talks program. “It’s not just the adult word count but the conversational turns, the back and forth, that engage the child.”

Providence Talks has enrolled more than 1,300 babies and toddlers since 2014 in programs that train parents to build in more conversation during the day. First, coaches provide strategies. Don’t just read the book but ask about the pictures. Turn off the radio in the car to talk about where you’re going. Describe the colors when dressing a tot, and pause to give them a chance to babble back.

Then, one day every two weeks, the children wear a small recorder that counts how many words they hear and the number of those “conversational turns.” It can count the returning baby babble but not the TV or radio. Parents are given the scores, to track their own progress.

Early results show two-thirds of participating families improve. Children who started the program hearing an average of 8,000 words a day were averaging 12,000 a day when the coaching ended, Molina said.

Brown University has begun an independent study to track whether the improvement was enough to make a difference once those children begin kindergarten.

In New York, Mendelsohn is studying a program that coaches parents at the pediatrician’s office, while they’re waiting for routine well-baby visits. The coaches use a prop – a free book or toy – to explain strategies for conversation and engagement, and record the parent trying. Going over the video shows what he or she did right and where to improve.

More than 400 at-risk families were randomly assigned to the video coaching or standard pediatric visits. By age 3, youngsters in the coaching program did better at imitation play and attention, and displayed less hyperactivity, Meldelsohn reported. He said the benefits appear to last as he’s tracking the first children in that study who’ve reached kindergarten age.