Teachers acquire a new skill: how to stop the bleeding 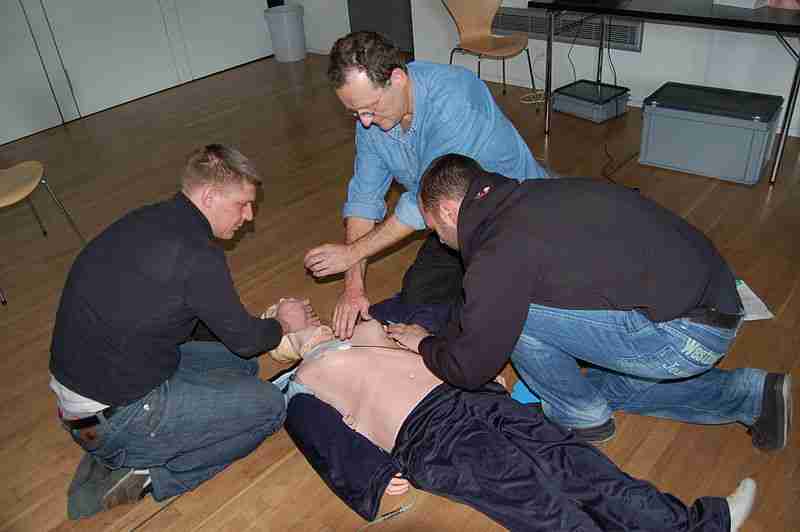 PLEASANT HILL, Iowa (AP) _ As she learned the basics of applying direct pressure, packing a wound with gauze and tying a tourniquet, sixth-grade math and social studies teacher Kari Stafford shook her head at the thought that this may now be an essential skill for her profession. Stafford didn’t like it, but with school shootings now a regular occurrence, she and her colleagues have reluctantly accepted that the attacks won’t stop and that teachers must know how to keep the victims from bleeding to death.

“Learning to help and not just stand there is important,” said Stafford, who joined about a dozen other educators at a medical training session at Southeast Polk High School, a sprawling 9-year-old campus surrounded by farmland in Pleasant Hill, just east of Des Moines.

Over the past five years, about 125,000 teachers, counselors and administrators across the country have been trained in stemming blood loss as school officials have become resigned to the grim trend. The effort is rapidly expanding, and more schools are now stocking classrooms with supplies that would be familiar to any military medic: lightweight tourniquets, gauze coated with blood-clotting drugs and compression bandages.

Although schools are adding security and even arming teachers to deter attacks, new emphasis is being given to saving the wounded while counting down the minutes until help arrives. The teacher triage idea was initially pushed by Dr. Lenworth Jacobs of Hartford, Connecticut, who operated on victims of the Sandy Hook Elementary School shooting in 2012, in which 26 children and adults were killed.

He feared that Sandy Hook wouldn’t be the last school shooting, and his assumption has been borne out again and again, with the Feb. 14 killing of 17 people at a Florida high school only the latest major incident. “I’ve been a trauma surgeon for over 40 years and have seen a lot of gunshot wounds,” he said, but an elementary school massacre is “entirely different. These are 6-year-olds with wounds from very high-powered weaponry, and it changes you.”

Jacobs and other like-minded surgeons formed a group that expanded to include law enforcement and other first responders who developed strategies for helping victims survive. In many school shootings, more victims could be saved if someone had at least slowed their bleeding.

“It takes a long time, longer than it takes to bleed to death, to clear the classroom, secure it and make sure there’s not another shooter,” he said. “The person who is going to save you is the person right beside you.”

The initiative, dubbed Stop the Bleed, has spread quickly and training is now available in all 50 states. Georgia has been a leader, spending more than $1 million to expand a test program and ship medical supplies to schools. Since last spring, the Georgia Trauma Commission, a state agency that works to improve emergency care, has coordinated the training of more than 18,000 educators.

Many teachers who might once have recoiled at becoming a battlefield medic have come around as school security measures have repeatedly failed to prevent shootings. In many cases, the shooters are students themselves who have ready access to the building. And lockdowns can add to the risk of death. “If students are shot in a lockdown they can just bleed out. They’ll die,” said Dena Abston, executive director of the commission.

In Bend, Oregon, paramedic Nolan McGinnis leapt at the chance to train school personnel on how to treat victims. He was among the first paramedics to arrive at Umpqua Community College in Roseburg, Oregon, after a 2015 shooting that left 10 people dead. “Especially with these school shootings, you never know if the shooter is going to give himself up or take his own life before we get there, or if it will be 15 minutes and we’re still waiting to go onto the scene,” McGinnis said.

The Bend trainers are also teaching high school students the techniques, and a group of students is raising money for bleeding control kits.

“A single person can’t stop a shooting but one person can save multiple lives, and to have something like that on my conscience is a great feeling,” said Sierra Sheeks, a Bend Senior High sophomore.

At the Iowa training, about a dozen teachers, aides and others gathered in an English classroom before the school day began for Southeast Polk’s nearly 2,000 students. Although no shootings have occurred at the school, the now-normal drumbeat of reports about threats, rumors and lockdowns in every region keeps the danger in mind.

Trauma care specialist Brian Feist and surgeon Richard Sidwell used a foam limb to demonstrate proper techniques, then gave teachers a chance to practice packing wounds and cinching tourniquets. Feist explained that direct pressure was more effective on especially young children and tourniquets best for multiple wounds. The ultra tight straps on a tourniquet could be very painful, he warned. “Your patient is going to be freaking out because it’s really, really hurting,” he said.

Teacher Denise Gulling noted that kids now accept that shootings could happen. They regularly have drills on when to lock doors and hide in their classroom. “Now, this gives me one more option for helping,” she said.