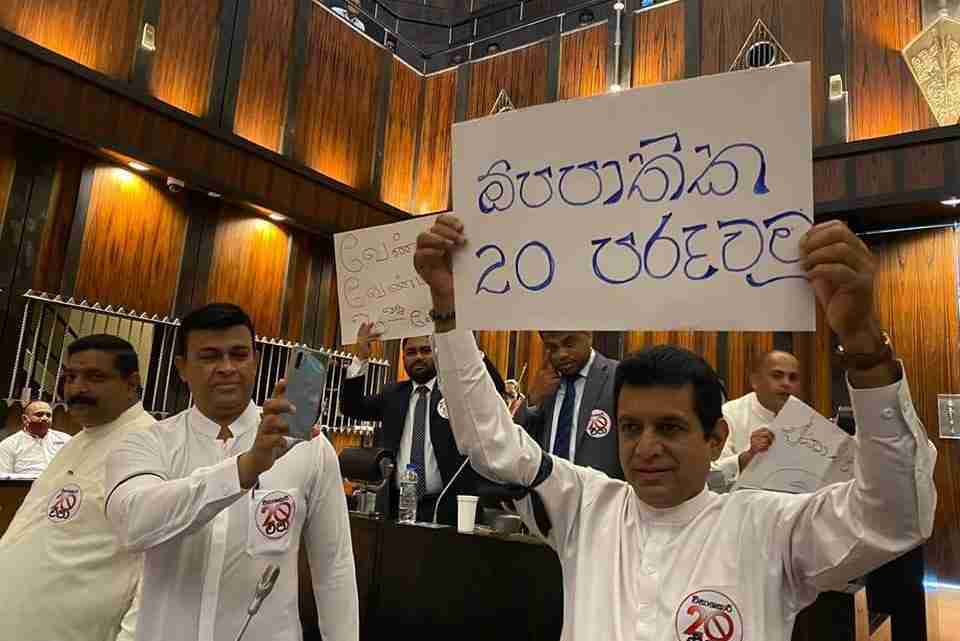 The 20th Amendment to the Sri Lankan Constitution, which gives exclusive powers to the president, is mired in controversy hours after its first reading on Sept. 22.

“We were not intending to file this petition on yesterday (Sept. 22), but the government had decided to have the second reading tomorrow (Sept. 23) if there were no petitions filed,” Weraduwage told Zenger News. “This is undemocratic.”

The second reading can take place only seven days after the first reading.

If the amendment is passed as a bill, the president would be able to nominate the chief justice and the two judges of the Supreme Court.

If the 20th Amendment is enforced, the president will have the power to dissolve parliament after a year of taking charge or through a resolution passed by half of the members, and can also remove the prime minister.

Under the 19th Amendment, the president can only dissolve Parliament after a mandatory period of four years and six months, or through a resolution passed by two-thirds of the members.

Further, clause 5 of the bill repeals Article 35, which means no one can question the capacity of the president, even if the fundamental rights of an individual are violated. That clause is also challenged in the petition.

“The president, the legislature, the public officers must be subject to rule of law. People should be able to question them under the rule of law,” said Weraduwage.

The petitioner has also challenged clause 15 that dilutes Article 78(1) of the Constitution. The article mandates that bills be proposed 14 days before being placed on the Parliamentary Order paper. Under the current amendment, the requirement is seven days.

Further, clause 24 repeals Article 104GG that grants the Election Commission authority to penalize individuals or organizations that fail to follow the commission’s directions. Also, clause 27 reintroduces Article 122, which deals with “Urgent Bills.” The article curtails provisions for challenges by the public. In the case of an Urgent Bill, the Supreme Court has 24 hours to deliver its opinion on the matter if consulted by the president.

“This is a gray area as they can bypass the usual process of gazetting,” said Weraduwage.

Under the new amendment, members of parliament can hold dual citizenship, with no maximum limit specified for Cabinet ministers, state and deputy ministers.

The petitioner also challenges clause 54, which repeals Article 156A(2) and mandates the Bribery Commission to investigate matters only if a formal complaint is made.

“Look at the overall picture — the auditor general is abolished, the president cannot be challenged, the bribery commission is diluted. What they are laying out is a very undemocratic, corrupted future,” said Weraduwage. “None of these provisions are for the enhancement of democracy, but will result in the degradation of it.”

Samagi Jana Balawegaya, the opposition party, is the second petitioner. The 20th Amendment is now open to the public for seven days to be challenged in the court before the amendment has a second reading.

When Ali Sabry, the minister of justice, tabled the draft, the opposition responded by holding placards reading, “Don’t want 20A.”

“This day is a black day in the history of democracy and Sri Lankan politics. This government is at work trying to implement the 20th Amendment as a law,” said Sajith Premadasa, leader of the opposition.

The opposition fears such a law could be misused by the president.

“The demand is to protect the sovereignty of the people from the dictatorship, as 20A is anti-democratic,” Premadasa said.

Asanka Shehan Semasinghe, a member of parliament from the ruling Sri Lanka People’s Front, questioned the manner of the response.

“Firstly, the opposition needs to know there is a way to oppose the amendment. The first is to challenge it in the court and the other way is to defeat it using the two-thirds majority,” he said.

“The people’s mandate requires the government to repeal the 19A and bring in 20A. We will also bring a new constitution after this. There is no way the ruling party is going to withdraw the amendment.”

President Gotabaya Rajapaksa, in a speech at the inaugural meeting of the Ninth Parliament, said the same thing. He stressed the priority of creating a system of one country, one law for all the people.