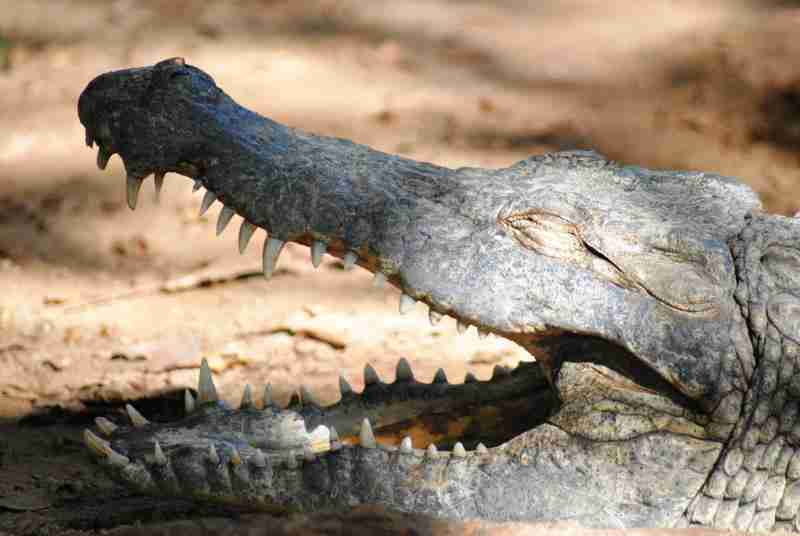 The composed demeanor of the enormous crocodile, sunning himself inside his enclosure with his “wives,” doesn’t give away that Big Daddy was a killer. He shows no signs of being a threat to onlookers walking around the pond along shaky boardwalks trying to get quick photos.

Formerly, Big Daddy had been known as the Tana Terror by locals because of his attacks on local fishermen and villagers. But his female companions, Sasha and Salma, have brought out his softer side in what was an initially savage captivity.

One of the oldest and biggest crocs in Africa—estimates vary, but he’s thought to be about 120 years old or more—he spends his retirement years breeding and relaxing with his companions at the largest crocodile farm in East Africa, Mamba Village in Mombasa, Kenya’s second-largest city.

The origin of his name is obvious: He weighs more than 1,000 kg (2,205 pounds) and is more than 15 feet long. It also derives from the character the predator displayed while being captured from his hideout, according to Mr. Hezron Awiti, the crocodile farm’s owner.

The village of Rhiketa Kubwa, situated almost 100 miles from Mombasa, rests along the meandering Tana River, one of the longest Kenyan rivers draining its waters into the Indian ocean. When the river breaks its banks, it floods whole villages and leaves people at the mercy of the blood-thirsty crocodiles.

Almost 35 years ago, he attacked and killed five people, including three schoolgirls, in a span of four months during late 1987 and 1988 before he could be subdued, taken captive, and brought to Mamba Village. The private conservation farm raises crocodiles for meat and hides and is a tourist attraction.

Elias Juma, one of the trappers currently working as the lead ranch warden at the crocodile farm, recalled how the violent Big Daddy was taken from the river at the village of Rhiketa Kubwa. Local crocodile trappers successfully used a cow’s head as bait to trick and trap the cunning monster. He was wrapped in chains and canvas while people bayed for his blood. Angry villagers had to be restrained by rangers from Kenya Wildlife Service, a government agency, from killing the 15-foot long crocodile.

It took the whole night for trappers to overpower the cunning crocodile, pull it to the roadside using ropes, and forcefully load him into a truck, according to the farm proprietor.

The woman who had lost her three daughters to the reptile collapsed when she saw the huge crocodile being captured after a long struggle with his trappers.

Big Daddy continued to be extremely violent and hostile that after arriving in his new home; he mauled 10 of his fellow crocodiles and was put in solitary confinement.

But after Sasha and Salma, aged 39 and 44 respectively, were introduced into his enclosure a few years ago, his demeanor surprisingly changed. The farm proprietor recalled that Big Daddy began to show affection toward the two female crocodiles and immediately shared his meal with them when they were brought into his heavily protected pond.

Big Daddy, currently blind because of his age, eats 60 kilograms of meat per meal, which is almost equivalent to two goats. They feed once a week.

“Spectacular feeding time for Big Daddy and his two wives is always at 1700 hours every Friday when the crocodiles could be seen jumping a few meters up from their ponds to get a bite of meat and fish that is left dangling from the top by a farm warden,” Juma said.

Plans have been posed over the years to have an official wedding for the three crocs, with a meat cake of course, but the plans have been delayed by various logistical challenges.

Next post How new guidelines could affect retirement investing

Previous post A teenage rancher saved her horse’s life. Together, they became champions.