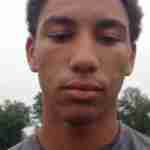 The high school student is old enough to have sex with his girlfriend, but sexting is illegal. Copening and his girlfriend they exchanged racy pictures when they were both 16.

In North Carolina you are considered an adult at 16 years old as far as being charged,” said Sgt. Sean Swain of the Cumberland County Sheriff’s Department. “But to disseminate and receive sexually explicit texts, photos or videos, you must be over 18.”

The were discovered when police search his phone, but it is unclear why the search was being conducted.

As a result of the search, both teens were charged with sexual exploitation.