A giant among lawyers Harold Long dies at 73 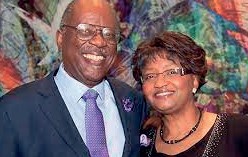 MIAMI – William Harold Long Jr. was always special. Even as a young high school student, he knew he wanted to go to the University of Miami, a predominantly white school where integration was barely underway. He never knew at that time, he would have to put everything on the line to make sure the University was inclusive of Blacks. He never knew he’d be arrested for it, and nearly thrown out of the very college he always wanted to attend.

But that’s exactly what happened. It was 1967 and his second year of undergraduate studies there. Under the tenure of University President Henry King Stanford, whom had met the young Long’s parents- a determined and conscientious Long founded the United Black Students (UBS) organization. The group formalized in 1968. However in an effort to gain more inclusiveness for Black professors and students at the institution, Long and a few classmates staged a daring sit-in at the University president’s ofﬁce. They were arrested, and Long’s parents, both lifelong educators, only learned about the sit-in through the television news that night. They couldn’t believe their eyes.

Long was set to be kicked out of college for his bold move, but the next day President Stanford called Long’s parents and told them he actually had a great deal of respect for their son for what he had done and they had nothing to worry about. Stanford even called the judge and told him he supported the students. He followed that up with a letter of recommendation for Long to be admitted to the University’s Law School with a full scholarship.

Long would later say. “I called the registrar’s ofﬁce and got the news. It was tremendous. I was accepted with a full scholarship to study law at the “U.”

With that, William Harold Long cemented his place at the University of Miami and would go on to seal his legacy as one of the most proliﬁc lawyers of all time, practicing for almost ﬁve decades.

Recalling poignant memories are two of his former law partners, Attorney H.T. Smith, and Attorney George Knox, both of whom have sealed legacies of their own. “I think that (Hal)Long in every respect was a living example of what a Child of God should be and should do. There’s no higher tribute than that,” said Knox, in a telephone interview about his former partner. They were partners for ﬁve years in the mid 1980’s. “I was a beneﬁciary of his legacy at the University of Miami.” Knox is also an alumnus. “My relationship with him was far more valuable outside of law. He was criminal law and I was civil law. But he was unreal in his capacity to get justice for his clients. He was a magnet. He had to have a special gift.”

Attorney H. T. Smith, with whom Long was a law partner from the late 1970’s to the mid 1980’s, said he would describe his friend in two words: courage and faith. Smith said he never knew that Long actually went to jail for his groundbreaking stance at the University of Miami. Smith said he found out much later in life when he saw a picture of Long behind bars. They’d been friends and law partners for years and still that slice of historyhe never knew. Smith asked him why he never told him, and Long humbly replied: “It never came up.” He said his friend also became Florida’s youngest judge in the state when he became Justice of the Peace for OpaLocka. When the two became partners in 1977, they also became the ﬁrst black law ﬁrm to have an ofﬁce in downtown Miami. Smith recalls they asked for it all, and got it. They wanted ofﬁces at the top of the high rise, they wanted windows with a view, and had plenty demands. And even to their own surprise- they got it all. “We signed a ﬁve-year lease and we’re the ﬁrst to break that barrier,” said Smith, who now teaches law at Florida International University and still practices as well.

Smith said even though Long had staged that sit-in at University President Stanford’s ofﬁce, the two became and remained friends for the duration. Smith says he aptly nicknamed his dear friend, “The miracle worker.”