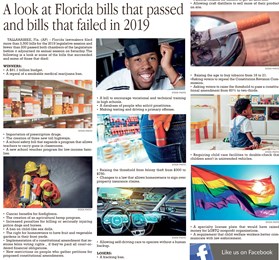 TALLAHASSEE, Fla. (AP) – Florida lawmakers filed more than 3,500 bills for the 2019 legislative session and fewer than 200 passed both chambers of the Legislature before it adjourned its annual session on Saturday. The following is a look at some of the bills that succeeded and some of those that died:

• A $91.1 billion budget.
• A repeal of a smokable medical marijuana ban.
• Importation of prescription drugs.
• The creation of three new toll highways.
• A school safety bill that expands a program that allows teachers to carry guns in classrooms.
• A new school voucher program for low-income families.
• Cancer benefits for firefighters.
• The creation of an agricultural hemp program.
• Increased penalties for killing or seriously injuring police dogs and horses.
• A ban on child-like sex dolls.
• The right for homeowners to have fruit and vegetable gardens in their front yards.
• Implementation of a constitutional amendment that restores felon voting rights _ if they’ve paid all court-ordered financial obligations.
• New restrictions on people who gather petitions for proposed constitutional amendments.

• A bill to encourage vocational and technical training in high schools.

• A database of people who solicit prostitutes.
• Making texting and driving a primary offense.

• Changes to a law that allows homeowners to sign over property insurance claims.

• Allowing self-driving cars to operate without a human backup.

• Parental consent for minors to get an abortion.
• Allowing craft distillers to sell more of their product on site.

• Raising the age to buy tobacco from 18 to 21.
•Asking voters to repeal the Constitution Revision Commission.

• Asking voters to raise the threshold to pass a constitutional amendment from 60% to two-thirds.

• A specialty license plate that would have raised money for LGBTQ nonprofit organizations.

Next post US pregnancy deaths up, and most are preventable