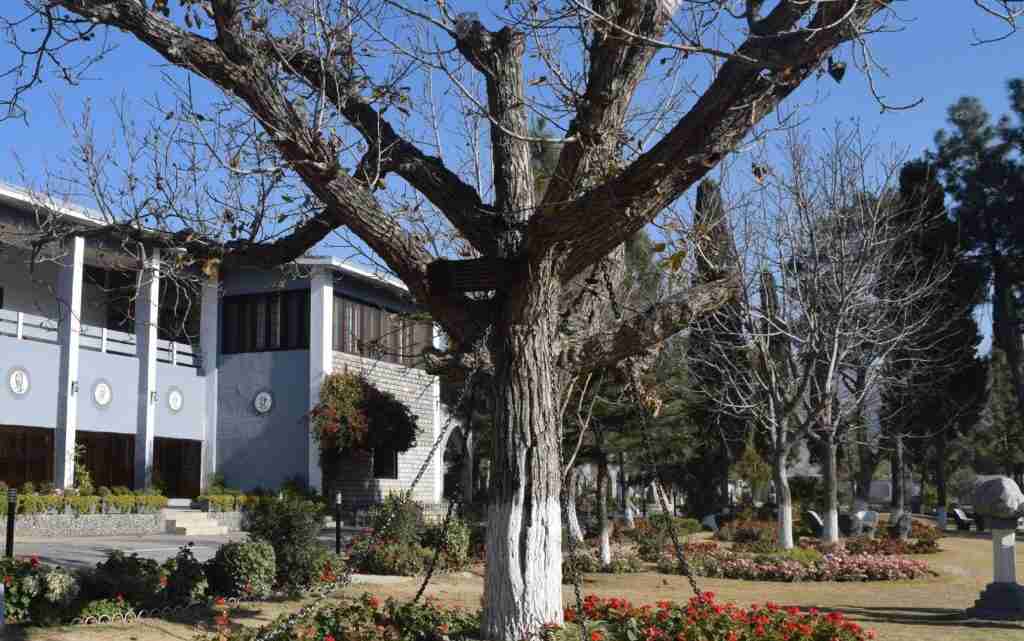 There are two prisoners in chains in Pakistan’s northwestern province of Khyber Pakhtunkhwa waiting to be released, long after serving more than 100 years of their “sentences.”

One is a banyan tree and the other is a double door of a fort. The banyan tree has remained in chains for 122 years, while the door has been chained since 1840.

As the story goes, in 1898, British army officer James Squid was posted at Landi Kotal, a town near the Torkham border. The remnants of the region’s colonial past are still visible along the Grand Trunk Road from Peshawar to the Pakistan-Afghanistan border in Torkham.

According to legend, one day, a drunk Squid imagined that the Banyan tree was lurching toward him, and so he ordered the mess sergeant to place the tree “under arrest.” Ever since then, no officer has been able to overturn the order and the tree continues to bear the weight of the oppressive colonial period after 122 years.

A plaque nailed to the tree trunk reads: “One evening a British officer heavily drunk thought that I was moving from my original location and ordered mess sergeant to arrest me since then I am under arrest (sic).”

From 1899, like the other posts in the Khyber, Landi Kotal had been garrisoned by the Khyber Rifles, an irregular corps of militia recruited from the tribes of the Khyber Agency.

The Khyber Agency was one of seven tribal agencies in Pakistan’s Federally Administered Tribal Areas. In 2018 they were merged into the northwestern province of Khyber Pakhtunkhwa, now called Khyber District.

“I saw the chained tree for the first time when I was 10 years old and the sight was imprinted on my mind,” said retired Col. Akram Khan of the Pakistan Army, who served in Peshawar. “Later, as an army officer, I visited the site many times. It has now become somewhat of a tourist attraction.”

Many in Khyber see this act of the British officer as a manifestation of a dictatorial mindset that has nothing to do with any rules, regulations or law.

Historian Mubarak Ali said that trees enjoy special importance in all religions and to target a tree in such a way is to send a clear message.

“It was to make the writ of the state well known to the indigenous population,” he said. “Now the chains remain because the tree has acquired historical significance.”

For many, the chained tree in Landi Kotal is a symbol of the draconian Frontier Crime Regulation — a black law that governed the seven tribal agencies and six Frontier Regions during the British Raj. Under the regulations, an officer could order the arrest of any tribesman for any reason, and the person had no right to appeal.

Like the chained tree of Landi Kotal, two panels of a double door of the Shabqadar Fort, about 32 kilometers (20 miles) from Peshawar, are chained to the watchtower. Here the story is not about a “drunk officer,” however, but about being made the “scapegoat.”

A plaque on the doors reads: “The weeping willows: In the winter of 1840, a Mohmand Lashkar (war party) succeeded in breaking down these gates. The then-Sikh Maharaja Sher Singh (Maharaja Ranjit Singh’s son) had them court-martialed for treason. French Gen. Jean Ventura headed the proceedings which lasted two days, finding them to be guilty as charged and the gates were sentenced to 100 years imprisonment. They are languishing enchained ever since (sic).”

Sometime during the winter of 1840, a group of Mohmand (a Pashtun tribe) warriors attacked the Shabqadar Fort (then known as Shankar Garh Fort) and made their way inside after a bloody clash. The fighting lasted the entire night, but eventually, the Sikhs, led by Prince Sher Singh, who happened to be staying at the fort, fought back, and by morning, the attacking tribesmen had been pushed out.

After the attack, the infuriated prince ordered an investigation to ascertain how the tribesmen had managed to make their way inside the fort. Ventura carried out a detailed investigation for two days. The verdict handed down surprised everyone; the wooden doors of the fort gate were held responsible for the invasion and were sentenced to chained imprisonment of 100 years.

Venturawas one of the first European officers to be employed by Ranjit Singh, the Sikh ruler of Punjab, to train his troops in the art of European warfare. As commander of the Fauj-i-Khas (European model brigade), he attained the rank of general and was also appointed Kazi and governor of Lahore.

Zafar Syed, an Islamabad-based journalist who writes on history, said that during the short-lived rule of Sikhs over most of what is now Pakistan, there are many incidences of bizarre decisions they made.

“In Urdu and Punjabi, there is the term ‘Sikha-Shahi,’ which means chaotic or atypical government policies,” he said. “So when you learn about a door sentenced to be chained during the Sikh era, you kind of nod in agreement that this must have been one of those examples of the so-called Sikha-Shahi.”

He said that Ventura probably did not want to ruffle feathers by laying blame on the Sikh ruler Sher Singh, who was inside the fort during the night of the raid.

The post A Tale of Two Strange Sentences: Tree and Door Bound in Chains for Over 100 Years in Pakistan appeared first on Zenger News.