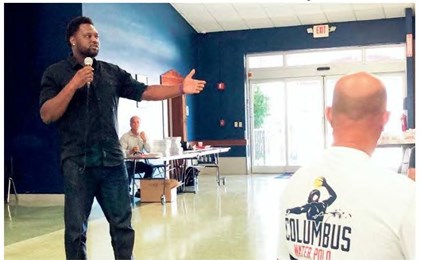 MIAMI, Fla. (BPRW) – About 55 coaches at Christopher Columbus High School in Miami recently did some learning of their own with the help of the Student ACES (athletics, community, education) nonprofit.

Founded in 2013 by Buck Martinez and his daughter, Krissy Webb, the nonprofit works to inspire and develop high school student athletes to become young men and women of character, honor and integrity.

The nonprofit hosts workshops at high schools across South Florida, with the support of Florida Power & Light Company (FPL), and has already mentored about 4,700 students since January.

“FPL supports organizations that break down barriers to opportunities for students; after all, these young men and women are the state’s future leaders and it’s critical they have the tools to thrive,” said Pam Rauch, FPL’s vice president of external affairs and economic development.

In the past two years alone, with the support of FPL, Student ACES has mentored roughly 4,000 students in Miami-Dade County.

But the Columbus workshop, held Aug. 8, was different.

This time David Pugh, the school principal, asked Martinez to host a workshop for the coaches.

“It was an awesome experience for the coaches to interact and work through some of the tough issues they wrestle within the classroom and the athletic fields,” said Pugh.

Martinez enforced with the coaches the importance of teaching the student’s core values so they can continue that learning even when Student ACES isn’t there with the teens. Each coach received a copy of Martinez’s latest book, “Man Up: Leading a Life of Honor” to help keep the learning going.

“A lot of these coaches will spend more time with the children than the actual father or parent, so they become instrumental in shaping the children’s character,” Martinez said. “If you can get the coaches to emulate those behaviors, you’re in great shape because it cascades through the whole school.”

The workshop was also special for two reasons: Martinez is a proud 1976 Columbus graduate who has a tremendous admiration for the academic and athletic culture of the school, and Martinez brought along Charles Johnson, the former Miami Marlins catcher who is a member of Student ACES’ board of directors.

“I brought Charles because I wanted to have the coaches hear from a player. I wanted him to talk about Little League, high school, college and the professional level and the values a coach should be teaching,” Martinez said. “The coaches loved him.”

Martinez said he hopes this Columbus workshop is the first of many to be held with coaches.

And he looks forward to mentoring even more students this year. As part of a sponsorship agreement with FPL, Martinez plans to train 37,600 high school student athletes by the end of 2023, many of whom will be in Miami-Dade County.