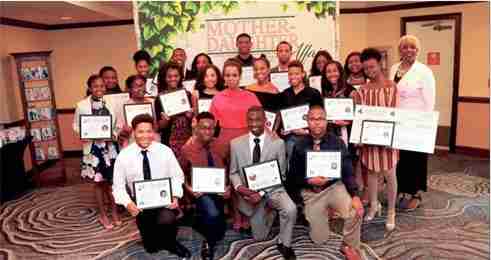 PALM BEACH GARDENS, Fla. – When you can’t afford to send your child to college, being awarded a scholarship can make all the difference in the world.

That is why the Zeta Tau Omega Chapter of Alpha Kappa Alpha Sorority, Inc., is making a difference in the lives of a many students in Palm Beach County.

“We do this because there is a need,” said chapter president Traci Cartwright Boysaw. “College is so expensive and we want to help as many students as we can.”

Boysaw said it’s a testament to the organization’s belief in education.

Event chairperson Delores Oliver Calloway, said it all goes back to the founders of the organization.

“I see it as a continuation of the tenets that the sorority was founded on —service in our community,” said Calloway. “In the spirit of our founders, we continue to help our young people prepare for tomorrow.”

Alpha Kappa Alpha is the first college sorority in America to be formed by black women; founded in 1908 at Howard University in Washington, DC. The organization is known for their classic colors, salmon pink and apple green, and their commitment to community service. Chapters, nationwide, have helped young African Americans seeking higher education as well as providing support for issues of family, health, and entrepreneurship.

The students, 21 of them, were on hand for the scholarship presentation. They represent various high schools around Palm Beach County.

The sorority raises the money throughout the year with various events, and holds a public event such as the luncheon, so their donors can see where the money goes. Yes, $25,000 is a sizable amount of money, but the group would even hope to surpass that amount in the future, said Calloway.

The organization honored those who are also committed to community service. Their “Cultured Pear Award,” was presented to Mary Feåacher, a senior citizen who is active at her church, Hurst Chapel African Methodist Episcopal Church in Riviera Beach. She is president of the Clevie B. Davis Women’s Missionary Society, where one of her missions is awarding Christmas gifts to children of those who are incarcerated.

The chapter’s “Treasured Pearl Award” was presented to Sylvia Carol Grant who founded the Priceless Pearls Youth Ambassadors. She said she had a dream at the age of 16 which guided her to help young girls make the difficult transition into womanhood.

Devyn Hill, a graduating senior from William T. Dwyer High School received the “Treasured Pearl Award,” which goes to a youth. Hill is highly active in several initiatives with the Urban League of Palm Beach County. With a 3.6 grade point average, Hill is planning to attend Florida A & M University in September.

Boysaw says the sorority is dedicated to equipping students for success in an ever-expanding world. “It goes along with our motto to promote education because it is the key, “said Boysaw. “We want to make sure our kids are prepared for a global society.”