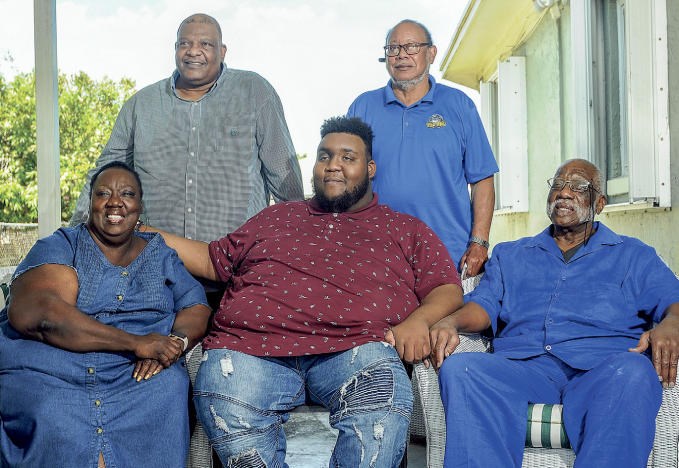 RIVIERA BEACH, Fla. – About a week after Willie Spence wowed the judges on the hit TV show “American Idol,” his grandfather, Pastor Willie R. Singleton, looked him in the eye and emphatically proclaimed that the young talent is going to be a preacher one day. That day under his carport, he repeated his stance over and over with news cameras rolling and reporters taking note. “I’m not taking anything away from your singing – that’s a gift God gave you. But listen to what I’m saying.

You’re my preacher!” Singleton exclaimed. Spence looked his grandpa in the eye, shook his head and said, “I prefer to say ‘motivational speaker!’” A reporter commented that of course a millennial of 21, would come up with such a retort.

News crews descended upon the Singleton residence in Riviera Beach that day because just days earlier Spence blew away the judges on “American Idol” with his rendition of the song “Diamonds” by singer Rihanna. Music icon Lionel Richie told him he’s sure to win a Grammy one day. Now, reporters wanted to share his story with the locals.

He grew up in Riviera Beach until second grade, when his parents moved the family to Georgia. His mother and father, Sharon Singleton Spence and Willie, Sr. recently moved back to the Palm Beaches while Willie remains in Atlanta. He won the Golden Ticket to the Hollywood round on the show, but that episode has not yet aired. And the talented singer, who is shy, but has been singing since a mere toddler, won’t say how he fared beyond what we saw recently on the show. “You would deﬁnitely want to watch this season!” he said, tantalyzingly.

When he told his parents that he would be featured on the show, they were elated but not surprised. “We were so happy, but we weren’t surprised because we knew he could do whatever he wanted to do. He was determined to succeed,” said his mom, Sharon. She says he ﬁrst sang at the age of two, and when they moved to Georgia some years later, he would wow the neighbors with his singing. “He would be the only little boy in the neighborhood who would go out and sing on the balcony. All the neighbors would say, ‘there’s Willie!’” But as he grew and developed, Spence was mindful of the sacriﬁces his family made to get him to where he is today. “My family would always drive me to my performances. My dad is a chef and would even sell dinners to make money for my performances and auditions,” he recalled.

But his family believes in his dream and wants nothing more than for him to reach his ultimate goal as a worldrenowned recording artist. “The songs he would sing came out of his heart,” said his grand uncle, Henry Arthur Taylor. “I’ve always known he was going to make it,” he said proudly.

Through tears, Sharon Spence said she is overjoyed. “I pray this journey on American Idol is everything he hopes for.”

“I tell him to give it all you’ve got, son,” said his father, Willie Sr. Spence did just that on his “American Idol” journey. “It was such a great experience for me. But these are three legends,” he said referring to judges Lionel Richie, Katy Perry, and Luke Bryant. “So, it was nerve-wracking.”

But the gifted young Spence packed in his nerves and gave it all he had just like his parents said. And with that done, ‘He’s going to Hollywood!’”