Help me. I’ve succumbed to a mental illness: Drapetomania. Look it up.

Once, slaves who desired, attempted, or actually ran away were thought to suffer from this mental defect.

That’s right. Some of our ancestors were considered mentally ill for wanting to be free of human bondage.

“Give me free” was considered, at the time, to be the mutterings of a mad man.

The logic? Then, it was considered an act against one’s self interest to leave what was considered an environment of protection that the slave master provided ; i.e., food, shelter, clothing, and a certain degree of care (for the individual’s soul). After all, the thinking allowed, these basic needs could hardly be met by the enslaved blacks, believed to be inferior to their white masters, and godless.

Therefore, entertainment of the idea of running away had to be a condition meeting the threshold of insanity.

Call me crazy, but I’m not feeling so good about all the benefits of being an American, often repeated and touted by many of our own successful kind.

So help me, I have gotten over the notion that the USA is the best country in the world for me (nee, black folks).

It is no longer a theory, but a daily documented fact that my life is being threatened under the current environment of fear/hate, mounting video-taped evidence of violence perpetrated against black bodies, and now, the escalating demagogic rhetoric spewing form the front runner(s) of the Republican Party for President of the USA.

I am under attack, and I’m ready to run away to somewhere else in the world where there is peace and not under threat of political uprisings.

But where, oh where, can I go?

I recently had a conversation with a group of other thinkers (all white) who were also planning their exit from the USA, if Trump is elected. One of them said that South Africa is attractive to her. I’ve been there and it does look good……..

I have heard it often repeated that if/when any human being considers himself superior to another human being, that the very thought also meets the threshold of insanity.

We are deluded if we continue to believe that we have evolved any higher than the animals. Sorry to say it, but mankind has not developed a higher level of civility. We continue to wither from fear of the ‘other’.

Where does that leave us as we approach the up-coming election for President of the United States?

It’s expected during the political debate season to hear opposing candidates elaborate on the shortcomings of their rivals. Good debate and useful information during the selection process helps the electorate to determine the distinctions amongst the field of candidates. This year’s field is overgrown with wild and poisonous weeds, and the snakes are feeding on one another.

And that includes both parties!

Make no mistake, Donald Trump is a manufactured product. He is as American as apple pie. Made in the USA, a real true nephew of our Uncle Sam, yes he is. And, as a distortion of what is good and right, we deserve him.

The American people are held hostage to a false set of ideas: that we are superior; that we can carpet bomb our way out of international conflict; that there are sub-sets of people worthy of our disdain and dismissal; that white is right (again?).

And that God has blessed this mess.

That’s what’s so scary, and makes me want to run away. 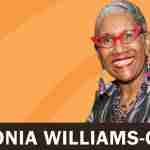