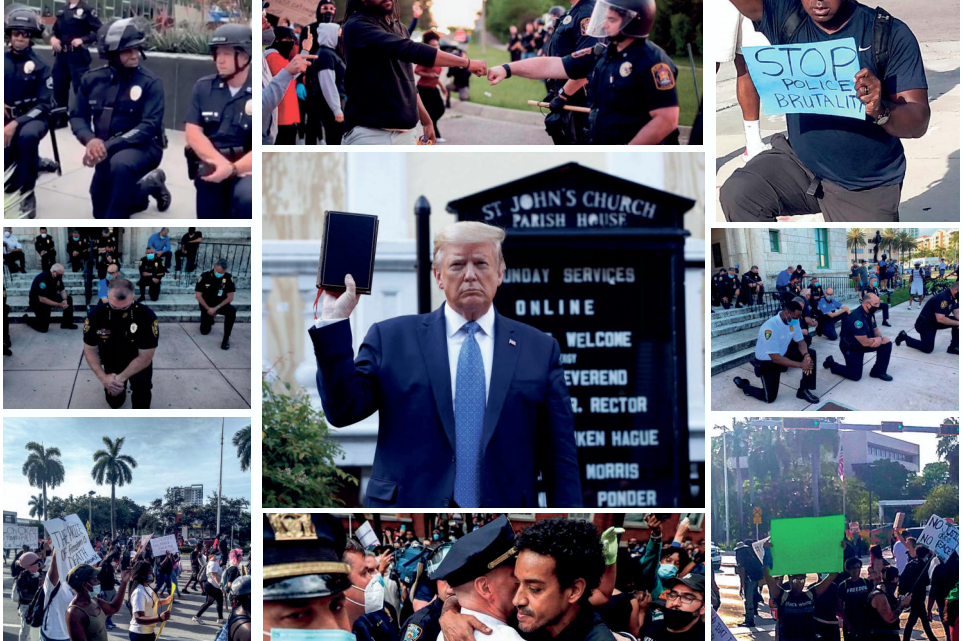 Like Trayvon Martin, George Floyd’s fatal confrontation began with the seemingly innocent act of going to a convenience store. While Trayvon had bought a bag of skittles Floyd bought a pack of cigarettes. He handed the clerk a $20 bill and went back to his car. But where is the evidence that he knew the bill was fake? When the police arrive the clerk also told the police that Floyd was intoxicated. But being intoxicated in public in Minnesota is not a crime. Nonetheless the grainy 17-minute video shows Floyd was arrested immediately. He was handcuffed and made to sit down on the sidewalk.

Floyd was unarmed. According to witnesses and the video of the incident Floyd, described as a gentle giant by his friends, did not resist arrest. Any pretense of legitimate police work ended there. A few minutes later ofﬁcer Derek Chauvin puts Floyd on his stomach with his hands handcuffed behind his back.

No police manual authorizes this method of restraint. Rather according to numerous articles on police procedure this creates a danger of positional asphyxiation. The risk increases when the suspect is intoxicated as Floyd was alleged to be.

Then, like something out of an urban horror story, Derek Chauvin places his knee on Floyd’s neck. For 8 minutes 46 seconds Floyd pleads for his life. He tells the ofﬁcer he can’t breathe. Bystanders hearing Floyd’s cries warn Chauvin Floyd really is suffocating. Chauvin’s own partners ask Chauvin if they should lay him on his side. In the atrocity that was Eric Garner’s case he cried out he couldn’t breathe 11 times.

This was worse. Chauvin ignored the pleas of Floyd minute by minute, each cry getting weaker yet more urgent. Doubling down on his performance of cruelty when bystanders pointed out blood was coming from his nose, Chauvin kept his knee on the black man’s neck, without even looking down. Pitifully Floyd cried out for his mother. His cries fell on deaf ears. In broad daylight, with his hands in his pockets Chauvin rode the neck of George Floyd until he was dead. Based on the video that I saw this was an intentional killing: murder in the ﬁrst degree.

But what makes this most recent killing particularly shocking is the image of a white police ofﬁcer with his knee on the neck of a black man is reminiscent of slavery.

It is as if Brown v Board of Education had never happened, as if civil rights laws never happened and as if the election of Obama never took place. Have we made racial progress, or in the words Biggie Smalls, “was it all a dream?”

Legally the issue comes down to whether the force is reasonable. But from Amado Diallo in 1999, an unarmed African immigrant killed by police who went to the wrong house (they said they believed his wallet might have been a gun); to Michael Brown shot by officer Darren Wilson–despite the fact that according to three witnesses Brown was unarmed and had raised his hands in surrender– police typically kill black men with impunity.

What enables this impunity is a culture of stereotyping and fear. During the Jim Crow era what drove lynchings, which whites often attended like a carnival to which they brought their family, was the image of the black man as a beast.

Yesterday’s bestial black man is recycled in today’s popular culture through the racist stereotype of “the big black man.” “The big black man” is presumed not only to be a dangerous criminal but endowed with super-human strength. This “big black man” stereotype was deployed in the case of Rodney King where a jury in Semi Valley, Calif., acquitted three of four officers (and hung on a fourth officer) despite the fact that, like Floyd, King was unarmed and assaulted while he was laying on the ground.

Police lawyers portrayed King nonetheless as being in control. The same “big black man” appears in the Michael Brown case. Brown was unarmed. But one of the grand jurors in Brown’s case asked if because of his size if Brown’s body could be considered a weapon. Said Ben Stein of Newsmax, “He [Brown] wasn’t unarmed, He was armed with his incredibly strong, scary self.”

These images do not merely devalue black lives – which they do – they operate like a fun house mirror distorting what the jurors see. They don’t see a human being; they see a monster or a beast. But there is one thing different between yesterday and today. There is now a movement of people black and white who have rocked America through days of anger, pain and demonstration. They are determined that this waking nightmare of unarmed blacks shot by police ends here. The world is watching. This is America’s moment of truth.

Donald Jones is professor of Law at the University of Miami, School of Law and the author of "Dangerous Spaces:

Beyond the Racial Profile" (Praeger 2016)