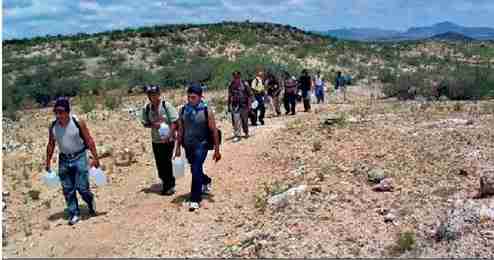 PHOTO COURTESY OF LIMITS TO GROWTH

PHOENIX (AP) – Arizona clergy called on activists to gather last weekend at the state’s border with Mexico and leave large jugs of water on remote trails for migrants who continue to cross the desert during the dangerously hot summer.

The Sunday gathering organized by faith leaders and local groups such as No More Deaths came just a week after the U.S. Border Patrol detained a group of 95 Central Americans, including at least one infant, in the same general area near the border where the heat regularly exceeds 100 degrees (37 Celsius) during the summer.

The people from Guatemala, Honduras and El Salvador ranged in age from three months to 60 years and were found to be in good health. They were turned over to the Immigration and Customs Enforcement agency.

The Rev. Susan Frederick-Gray, president of the Unitarian Universalist Association who was a Phoenix minister for nine years, said she wants to demonstrate solidarity with migrants and aid workers.

Arizona faith leaders have a long history of activism and were at the forefront of the 1980s sanctuary movement that provided safe haven to Central Americans fleeing civil war in their homelands.

“Providing humanitarian aid is not a crime,” said Frederick-Gray. “Fleeing your country to save your life or save your children is not a crime. Human beings have a right to flee when they are in danger.”

Immigration attorney Rachel Gore Freed, vice president of the faith-based Unitarian Universalist Service Committee, said the stream of Central American migrants still crossing the region underscores “the incredible violence they are fleeing” and insisted that “access to water during a long and complicated route is something that should be protected.”

The administration of President Donald Trump has been outspoken in its opposition to illegal immigration and promotes the construction of a border wall to keep migrants out.

The activists set out shortly after sunrise Sunday to leave one-gallon (3.79 liters) jugs of water along trails frequented by migrants in the Cabeza Prieta National Wildlife Refuge near Ajo, Arizona.

Thousands of migrants have died crossing the border since the mid-1990s, when heightened enforcement in San Diego and El Paso, Texas, pushed traffic into Arizona’s remote deserts. The remains of 128 such border crossers were recovered last year from the southern Arizona desert, according to figures from the Pima County Medical Examiner’s Office.á Alicia Dinsmore of No More Deaths said a large number of the remains were found in Cabeza Prieta and neighboring Organ Pipe Cactus National Monument.

Local Border activist Scott Warren was arrested in January after Border Patrol agents conducted surveillance on a building in nearby Ajo, about 40 miles (64 kilometers) north of the border, where two immigrants allegedly were given food, water, beds and clean clothes.

The 35-year-old No More Deaths volunteer faces a federal charge of harboring two people in the country illegally. Warren has declined to speak with the news media and is seeking protection from prosecution, saying his spiritual values compel him to help all people in distress.

Warren’s defense attorneys have argued that their client “could not, consistent with his conscience and spiritual beliefs, turn away two migrants in the harsh climate of the Sonoran Desert.”

U.S. prosecutors at the federal court in Tucson have said the two migrants found with Warren were never in distress.

Warren was arrested several hours after No More Deaths gave news organizations videos of a Border Patrol agent kicking over water jugs meant for immigrants and of another agent pouring gallons of water on the ground.