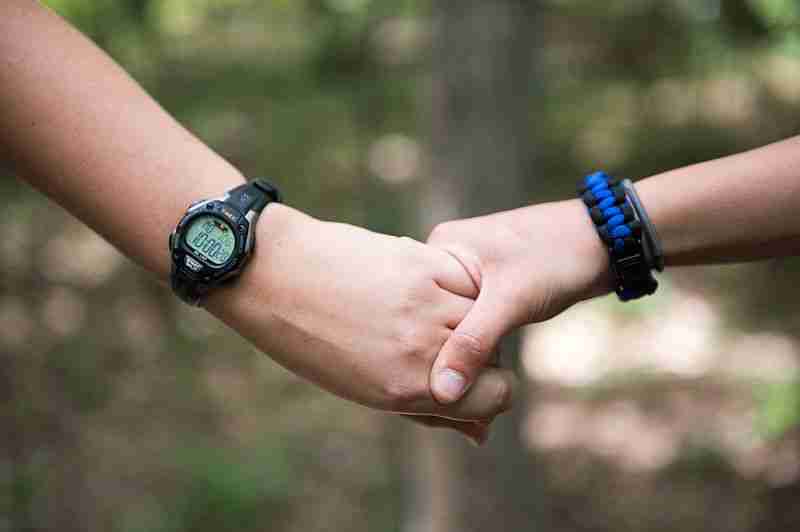 CAPE CORAL, Fla. (AP) _ Christian Diggs walks the hallways of Ida Baker High like a teenager who knows his place.

High-fives, handshakes and arms around the shoulder are the norm for the 16-year-old with Down syndrome, known to most around the school as “Mr. Bulldog.”

Only, the mother who used to walk the halls as an assistant principal, and the brothers who used to welcome him into their groups, and the classmates whom he spent years connecting with, are no longer there.

Diggs is building a new identity inside these walls. He’s meeting new students, connecting with different teachers, and learning what truly motivates him.

“There was his normal thing last year, where he would wander around the school after the bell and either watch his brothers at practice or go to another sporting event,” Ida Baker athletic director Brian Conn said. “But that’s not the same now. I think early on it might have been hard on him, but he seems to be adapting and getting used to the different itinerary.”

His mother Debbie has moved on to North Fort Myers, where she was named principal in August. And his brothers, Drayton and Jordan, are at the University of Florida, where they are studying engineering and competing on the track and field team.

Diggs graduated alongside his siblings last spring, too, and it represented the last time the three would be together in a school setting. But this year, Christian finds himself back at Ida Baker High with the school’s Exceptional Student Education program, where he could be for the next six years.

And that’s important, because it’s here where Diggs will continue to mature and develop as a teenager, and eventually, as an adult. Federal law passed in 1975 guarantees students with intellectual disability education up until the age of 22.

A big part of his development will occur through the school’s Baker Buddies program, which is in its ninth year and ingratiates general education students with intellectually disabled students through classes and exercises. It’s promoted the idea of inclusion around the school.

“He’s a rock star here,” said Joe Haskill, who leads Ida Baker’s ESE program. “For the most part, our kids take him under their wing. And that’s the unique thing about Baker. These kids like Christian are able to feel their worth because of the connection they make with the kids.”

Christian’s daily workload varies, but some of his favorite classes are his electives which place him with the general student body, like TV production and theater.

On a recent school day, Diggs sat in front of a green screen and read a morning announcement to the entire school.

Behind the scenes, he collaborates on everything. Senior Blake DeStout, who knew of Christian before the year but met him for the first time at TV Production, was operating the camera and wanted him to finish the statement with a popular dance move. Diggs chose instead to do a finger point.

Over the course of the class, Diggs will operate the production equipment and eventually learn how to edit tape. In theater, he’ll perfect his comedy with impromptu exercise and sing to prepare for the spring musical.

“He never sits around,” said Geralyn Wilkinson, a former news professional who got into teaching 10 years ago and leads the TV production class. “He’s a go-getter.”

That’s not to say sports don’t have a place in his life anymore, though. There’s school, and then there are sports.

Where would Christian Diggs be without athletics?

Two springs ago, Diggs was given the opportunity to run for a touchdown during Ida Baker’s spring game. It was an idea Conn encouraged, because he wanted to reward the amount of time Diggs had spent on the field watching the team play or practice.

“The touchdown was awesome,” Conn said.

But football hasn’t been Diggs’ only extracurricular love. Over the years, he’s been known to cut a move. At random points during the school day, teachers might find him jigging to Michael Jackson’s `Thriller,’ or perfecting any number of new dance moves like the Dab.

He’s been a member of the school’s hip-hop team, been on the swim team and has thrown shot put for the track and field team. He even won an adaptive state title for Ida Baker last year at the FHSAA championships at IMG Academy.

Because Diggs enrolled in high school at the age of 12 – Debbie says it made sense to put him in at the same time as his brothers – his eligibility for participating in athletics has expired. But Debbie says there’s a desire to register her son for Special Olympic events, and to keep him active in athletics during practices.

“He’s been involved in that before, so that’s something we’ll probably get him involved in,” she said.

In the meantime, Diggs enjoys going to school every day and meeting new people.

The place is different in some senses, but Diggs is finding out where he fits among the student body.

“His experience has been that I think he sees himself as anyone else in the school,” Debbie said. “It’s really only been this last year where he started to have this realization that he has Down syndrome.

“We talk about it,” she added. “He sees himself, he’s in classes with disabilities, but he spends more of his time with kids in general education classes. He doesn’t see himself as different. He’s happy and everybody is his friend.”

That wasn’t more evident than at a volleyball game this past fall.

Debbie, who wore the Red Knights’ colors of black and red to the match, brought him to Ida Baker where the Bulldogs were hosting North Fort Myers.

At one point, she was ushered over to the North Fort Myers side. Her new students persuaded her into sitting in the center of the visitor’s side, where they soon let the Ida Baker student section know and began to chant, “We’ve got Diggs!”

Of course, Ida Baker knew exactly what to do. They signaled Christian over to their side – his side. And before long, there was another chant.

All was well. They had their man.

Next post Miami may try bacteria-infected mosquitoes in Zika fight