A play about the shame of sexuality in Christian Jamaica 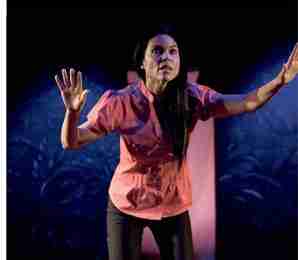 Debra Ehrhart is a Jamaican woman who happily accepts the title of “drama queen.” An accomplished actress and playwright, she skillfully creates stories with universal themes, while delivering them exclusively in her authentic Jamaican accent.

I first met her at a 2014 showing of her acclaimed one-woman show “Jamaica Farewell.” That story hilariously chronicled the sometimes nefarious circumstances of her journey from “yard” (Jamaica) to “foreign” (America), giving powerful context to more-common-than-talked-about awkward family situations, politics and social circumstances that Jamaicans and, as she eventually learned, people of many other backgrounds could identify with.

It seems she has done it again, this time broaching the notions of sex and sexuality in a hyper religious society, and still hilariously connecting far beyond her Jamaican roots. Her new play Cock Tales: Shame on Me! explores the guilt and shame associated with the notion of sex in Christian Jamaica, especially for girls. It starts off with her childhood memory of a young male family member curiously asking her to touch what she calls his “one eyed monster.”

The next story relays a narrative that gets my own feminist blood boiling. A pastor makes an inappropriate advance toward a 10 year old Debra, then when she and her mother report him, they are advised to change churches so folks don’t get a bad impression of her!

She goes on to describe a number of interactions where the “one-eyed monster,” or the man attached to it at a given time, terrifies, embarrasses, disappoints or delights her. Throughout her storytelling, she balances humor and deep-reaching emotion, while maintaining tasteful delivery, even for a prude like me!

Her objective is to share that even through the traumas she describes, she survived and thrived well enough to now make light of it all.

With audiences filled with a healthy mix of Jamaicans and Americans, she’s looking forward to ending this South Florida run on a high note. Her final South Florida shows will play Thursday, October 27 through Saturday, October 29 at 8:00PM and Sunday, October 30 at 5:00PM at the Empire Stage theater in Fort Lauderdale.

Calibe Thompson is a video media producer, speaker and author. Learn more about her services at www.islandsyndicate.com and watch her on ‘Island Origins’ Mon at 10:00PM and Tues, Thurs and Sat at 9:00PM on South Florida’s BECON-TV (Ch 63 / Comcast 19)

Next post Vote: It is your right and civic duty

Previous post Who are you with Clinton vs. Trump?