After the storm: South Floridians love their neighbors 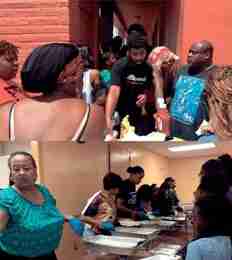 South Floridians from all walks of life came together to help their neighbors after Hurricane Irma.

These words spoken by CNN anchor Chris Cuomo after Texas was devastated by historic flooding from Tropical Storm Harvey. But less than a week later, those same words would ring true for many Floridians who lived through Hurricane Irma.

Though Florida wasn’t fully underwater like parts of Texas, Irma undoubtedly did her damage.

The Florida Keys were devastated; there was bad flooding and structural damage in certain areas; roads caved in; millions were left without power for over a week; access to fresh food and the ability to cook a hot meal were limited; for many money was scarce; eight elders in a nursing home died as a result of overexposure to heat; families got sick due to carbon monoxide poisoning from generators; families spent hours on the road evacuating and returning, some running out of gas in the process; many hourly employees were unable to go to work because their places of employment were closed – and the list goes on.

Needless to say, people were suffering – and while mainstream media highlighted things like the minority of looters and burglaries taking place in urban communities, there is a different story that unfolded in “The Hood” that hasn’t been as widely told.

Everyone knows when the nation suffers crises, poor communities are usually the hardest hit. But this time, there was an overwhelming amount of people who decided they wouldn’t wait for relief to come, they’d deliver it themselves to those who needed it most.

South Floridians from all walks of life stepped up in major ways to love their neighbors – and it was an amazingly beautiful sight.

Together the collective provided food and other essential items to over 20,545 people the week after Irma hit.

“It feels good bonding with my people (sic) in different neighborhoods and of different backgrounds and cultures. Hugs in Opa-Locka to Overtown, even in little Havana where there was a language barrier love built a bridge, and My little Haiti family know I can never get enough of them. I love my ppl (sic), it’s my responsibility to CARE! #OneHoodAtATime,” Valencia Gunder, founder of MTHS and CEOC, posted on Facebook during the relief efforts.

Miami Gardens Mayor Oliver Gilbert spent countless hours pounding the pavement to help his community, despite not having power himself and just losing his grandfather.

“I want to thank the City of Miami staff and our volunteers for their support in this week’s distributions. Together, we have demonstrated our strength as one community,” Hardemon said.

Prominent entertainers who hail from Miami also showed up to assist with relief efforts. Luther Campbell (Uncle Luke), Angela “Myammee” Pitts and DJ Mecca aka Grimo were all hands on deck to serve their communities, handing out food and other essentials at Charles Hadley Park in Liberty City and the Little Haiti Cultural Complex, respectively.

“Because I’m from Miami, and especially from the city, Liberty City, when I saw Keon (Hardemon) needed help, who is my fellow Famuan grad, I had to help! “That could have been easily my mom, my twin brothers and myself needing assistance because I remember a time when we always got help,” Pitts wrote in an email to South Florida Times. “So me lending a hand for a few days to a community where I grew up at was a NO BRAINER! Instead of me waiting at a family house ‘till (sic)

my power came back on, I said let me go lend a hand and be blessing to others. Simple! And not because my nickname is Myammee … it’s because I am from Miami and WHY NOT!”

In Broward, Florida State Representative Shevrin Jones provided a free hot breakfast, cases of water, charging stations, etc. to the West Park community – and this was just a day before he buried his brother, who died on September 1.

“Some asked how have I been able to do this with (sic) so dealing with the death of my brother. Truth is, it’s no strength of my own. I truly lean on my faith in God. Truth: I y when I’m alone, I have a pain that I have … never felt here, but I know Kaneil D. Jones would want me doing what made him happy to call me ‘Rep Lil Bro,’” Jones posted on Facebook. “Lastly, it’s not about me, truthfully, it’s not about ny of us. There are people who need help, and our goal is put a smile on someone else’s face, and make their day little brighter. Find a place in your little world, and help someone else, even through your pain.”

Broward County Public Schools Superintendent Robert Bob” Runcie was also on the grounds in Broward, along with his staff, tending to the basic needs of children and families. They helped with Jones’ hot breakfast, provided lunch at eight schools throughout the district and had another distribution event on Saturday.

“I think it’s important for all of us to do what we can to make sure we’re supporting folks in the community. We now there’s many people in Broward County who have not ad power for quite some time. They’re having a challenge trying to get access to food and other resources, so we’re ying to do all we can to mobilize to ensure we can help residents,” Runcie told the South Florida Times.

In addition to public servants, elected officials and entertainers, there were countless private citizens that spearheaded efforts to serve their fellow Floridians. In fact, this article does not have room enough to name them all.

However, if you ask Mungin, he doesn’t think he did anything extraordinary.

“I know yall (sic) gone hate me for this … But, not a “thing” I did deserves any praise. I was simply acting as a concerned and engaged citizen on behalf of the village!!!!” Mungin posted on Facebook Saturday. “But, like one of many football quotes: ‘Big time players, make big time plays in big time games.’ There’s no exception. Actions speak louder than words!!!! Excuses are tools of incompetence!!!” While the aforementioned people helped lead the recovery and relief efforts in urban communities across South

Florida, each and every individual that helped deserves a salute.

Because of them, the post Irma challenges in communities like Opa-Locka, Liberty City, Overtown, Little Havana, Allapattah, South Dade, West Park, North Miami, etc. were addressed in record time. Their love and support made dealing with the challenges Irma brought a little more bearable.

Though looting and other things did occur during Irma, the goodwill of many outweighed the poor decisions of a few.

This is the Hurricane Irma story about urban communities that needs to be told – and it is our privilege, pleasure and duty to tell it.