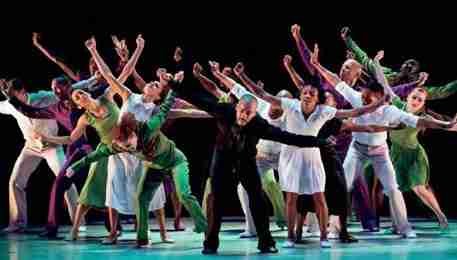 Each February, the Alvin Ailey American Dance Theater makes its South Florida appearance. Every year, new fans are introduced to the brilliant, visually stunning show. The rest of the audience is likely comprised of people whose attendance at the annual dance feast has become a recurring part of their lives. And no matter how many times they indulge in the Ailey tradition, each experience feels like the first.

“It’s so powerful when you first see an Ailey performance, when you first see Revelations. It’s such a spiritual journey as much as you’re entertained. It hits you on all those levels. It entertains you, it educates you about the history of a people in this country, it’s thought-provoking, spiritually fulfilling. You want to keep having that experience again,” said Robert Battle, artistic director of Alvin Ailey American Dance Theater. “People delight in that. People delight in bringing new people to see the Ailey performance.”

The piece that most, if not all, fans look forward to is Alvin Ailey’s masterpiece, Revelations, which he choreographed in 1958 and is included on every program. “It’s just one of the most incredible works ever created,” said Battle, who said this year’s new performances will include a duet he choreographed to the music of jazz great Ella Fitzgerald. Another piece will use the music of master trumpeter, Dizzy Gillespie.

Battle said the audience will also get to enjoy a performance created by Kyle Abraham, a McCarthy Genius Award winner. According to Battle, Abraham is “… a brilliant choreographer, (who) did a work called Untitled America, which seems very fitting for right now. It’s about mass incarceration … it takes direct interviews from people who have been in prison and their stories in a really beautiful, poignant and timely way,” he shared.

His longstanding association with the Ailey organization, including his work as a choreographer and artist in residence since 1999 led to Battle being personally selected by Judith Jamison in 2011 to become only the third person to head the Company since it was founded in 1958. Battle is from the same Liberty City community as Academy award nominated Moonlight director, Barry Jenkins.

In addition to a slew of awards, Battle was also honored as one of the “Masters of African-American Choreography” by the Kennedy Center for the Performing Arts in 2005, and he received the prestigious Statue Award from the Princess Grace Foundation-USA in 2007.

He received an honorary doctorate from the University of the Arts in 2014. When President Obama bestowed the National Medal of Freedom to Alvin

Ailey, the nation’s highest civilian honor, Battle visited the White House to accept the award. He was also named a 2015 Visiting Fellow for The Art of Change, an initiative by the Ford Foundation.

In October 2015, Simon & Schuster published “MY STORY, MY DANCE: Robert Battle’s Journey to Alvin Ailey,” an inspiring children’s book based on Battle’s life.