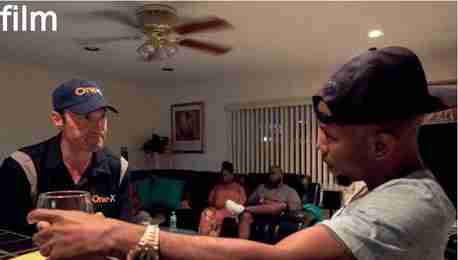 Brian Austin Green and Haas Manning get ready for an intense scene on the set of locally-based film “Chasing Titles: Volume 1.”

Called one of the most buzzed about short film of the year, the film has won multiple awards including: 22 Best Picture awards at festivals across the nation, including Los Angeles Film Awards, NYC Indie Film Awards, Top Shorts, LA Shorts Awards, Hollywood Dreamz International Film Festival and Festigious LA, to name a few.

Egypt and the entire cast will be in attendance to present the film and have an interactive audience Q&A following the screening.

“It’s about a father who’s really trying to make ends meet, but has issues,” Egypt said. “He loves his son and really can’t find a way to provide for his family, so he takes some desperate measures to make some things happen.”

Green plays Joe, the father who can’t get his life together so he begins running a side-hustle while working for an express mail company.

His 12-year-old son, Caleb (Gimenez) is fed up with the living standards in his dysfunctional family. When Joe loses his job and screws up his side hustle, he falls into deep depression, turns to cocaine, painkillers and alcohol, which causes further turmoil. This forces Caleb to have to make the most important decision of his life.

Chasing Titles is Egypt’s debut film from his newly launched independent film label OPREME Films. Egypt is a successful entrepreneur and author of the book, “True and Rich: Journey of How I Found Myself, Success & Inner Peace.”

Though Egypt – who attended middle and high school in Palm Beach – works in Hollywood, California now, he said he wanted to shoot the movie in Palm Beach County.

“I’ve done so much in Palm Beach as far as starting and selling companies and … I’ve done (lots) for the community,” Egypt said. “At the end of the day, this is show business and I’m here to change the game.”

“We worked with the production company to secure some sites and to work with respect to understanding the dynamics of our community, so we were very fortunate to be selected as a host location,” Evans said. To learn more about “Chasing Titles: Volume 1,” visit www.chasingtitles.com.

For information on the exclusive screening, contact The Mosaic Group at 561-651-9565.

Next post There’s no doubt Marlon Wayans is funny, but he's also focused and he's bringing his talents to Miami